Gifts and support for Seafarers who visited Mission over Christmas 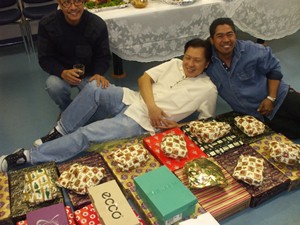 Twenty five seafarers visited the Flying Angel Centre at Belfast Docks on Christmas Day 2013, and 38 were welcomed in the Centre on Boxing Day.

An article written by Eleanor Launchbury, who volunteers at the Mission to Seafarers with her husband Geoff, reveals that there were an unusual number of ships in Belfast Port over the Christmas holiday period, and 227 seafarers visited the centre between Christmas and New Year’s Eve.

Eleanor expressed thanks to everyone who had contributed to the appeal for toiletries which were used in Christmas parcels which were handed out to seafarers.

Eleanor writes: “The parcels were prepared by volunteers and 220 were distributed in Belfast, Lisahally and Londonderry during the two weeks before Christmas. All were most gratefully received and appreciated.

“One captain who came to the centre on one of my evenings was most anxious to convey his thanks for the generosity shown to him and his crew. He told me that when they are at sea for a long time they can feel forgotten and alone, and to receive a gift when they arrive in port, particularly at this time of year, is a wonderful boost to morale.”

Eleanor said an appeal was launched at the centre for the Philippines Disaster Fund and this raised in excess of £5,000 donated by benefactors and visitors to the centre during December. “The money will be used as required on the ground in consultation with ISWAN (International Seafarers Welfare and Assistance Network),” she said.

Eleanor welcomed the news that the Mission will soon have a permanent presence at Warrenpoint Port. “A significant number of ships use the port and it is felt important that the crews should have access to help and advice, if needed,” she said.

“There will also be a facility to purchase phone top–ups etc. In addition, the formation of a joint approach covering all ports, North and South, remains under discussion and hopefully will be realised during this year.”

Congratulations to both Geoff and Eleanor who have been honoured by Mission to Seafarers HQ in London with a Silver and Bronze Badge respectively in recognition of their voluntary service over the years. Geoff had been associated with Mission to Seafarers for almost 30 years now. “We both hope to continue our involvement for some years to come,” Eleanor said. The couple are parishioners of St Columba’s, Knock.

The Chaplain to the Mission to Seafarers is the Rev Colin Hall–Thompson.