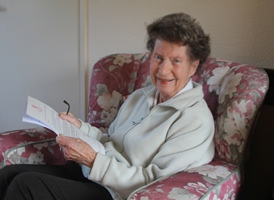 Congratulations to Mrs Peggy Weir, a parishioner of the Parish of St Peter and St James, who has been honoured in the Queen’s New Year Honours List.

Peggy, who is in her eighties, was awarded an MBE for Services to Education.

A former pupil of BRA, Peggy read History at Queen’s University and studied teacher training at Stranmillis College. Her first post was as a teacher in St Mary’s, Crumlin Road. After taking a few years off for family reasons, Peggy moved to Ligoniel Primary School where she stayed for the rest of her teaching career which spanned a further 30 years. When she retired she was vice principal.

Peggy has been a member of the Board of Governors at Ligoniel Primary School since her retirement some 20 years ago, and is currently Chair of the Board.

She learned that she was to receive an MBE in November. “I was utterly astounded when I got a letter with ‘The Cabinet Office’ stamped on the outside,” Peggy admitted.

She had to keep quiet until December 31, when the New Year Honours list was published, and since then has received congratulations and cards from many people.

“I was told by the school principal that I had been nominated by my former pupils who said that I had done so much for them and for the area that they felt it ought to be acknowledged in some way.

“I am delighted to receive the award but what pleases me most is that my former pupils wanted me to get something.”

A keen historian, Peggy is secretary of the North Belfast Historical Society and has published a book of old photographs of North Belfast.

Peggy, whose husband William died 18 months ago after 56 years of marriage, is looking forward to going to Buckingham Palace on April 4 to receive her MBE.