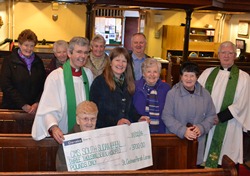 St Cedma’s Parish, Larne, has presented a cheque for £3,700 to CMS Ireland for its Emergency Appeal for South Sudan.

This money was raised by Larne parishioners to support the Appeal, sponsored by Connor Diocese through CMSI, to provide emergency support including food, blankets, medicine and cooking utensils for the thousands of internally displaced people who have fled the violent conflict in the north of South Sudan.

Fighting in the world’s newest state broke out in December and soon spiralled into tribal warfare. Some 10,000 people have been killed and more than 800,000 have left their homes.

A team from Connor was due to visit its partner diocese of Yei in South Sudan in January, but the trip was postponed due to the ongoing unrest. CMSI launched its emergency appeal later that month.

The rector of St Cedma’s Parish Larne, Archdeacon Stephen Forde, has visited Yei on several occasions as Chair of Connor’s Council for Mission and signed the first of two partnership agreements back in 2007. St Cedma’s has a close friendship with Bishop Hilary who has been a guest in the parish in the past. 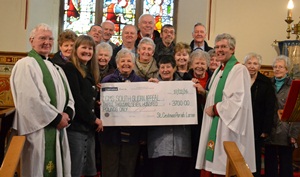 The St Cedma’s collection is part of the wider Connor Diocesan Appeal (including a further £300 raised by the congregations of Glynn and Raloo) to support the work of the church in South Sudan providing essential support for the tens of thousands of people who have been internally displaced by the most recent conflict.

A ceasefire was signed by the rebels and government forces in South Sudan on January 23, but violations have been reported on both sides. This BBC News Africa report on the situation in Malakal indicates that violence is continuing in parts of the country.

For details of how to donate to CMSI Emergency Appeal for South Sudan, please follow this link.