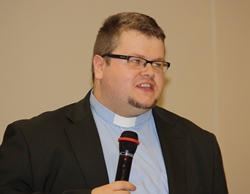 The Dean and Chapter of Saint Anne’s Cathedral, Belfast, have appointed the Rev Adrian Dorrian and the Rev Nigel Kirkpatrick as minor canons.

They will join the cathedral’s existing minor canon, the Rev Stephen Fielding.

Minor canons have largely an occasional working role in the liturgical life of a cathedral, primarily as clergy who are also gifted as singers and are able to lead Choral Evensong and Sung Compline with the Choir.

The Dean of Belfast, the Very Rev John Mann, said: “They are not accorded the title ‘Canon,’ nor are they part of the Chapter of the Cathedral, but are a valued and important part of the flow of the musical life of a cathedral.”

The Dean said it was the aspiration in St Anne’s is to have a sung service every day, but this was likely to take another two or three years to realise. At present Compline is sung on Mondays at 5.30pm, and Choral Evensong is on Wednesdays at 5.30pm – both during term time.

Dean Mann said it was hoped that a third weekday service may be put in place shortly.

“The need for minor canons to sing these services occasionally, in the absence of the resident cathedral clergy who can sing, will grow as the number of choral services increases, though the commitment will be small at the moment,” he said.

“We do encourage people to attend the Cathedral at 5.30pm on weekdays, especially on Mondays and Wednesdays for the choral services. The traffic is so much lighter after 6pm!”