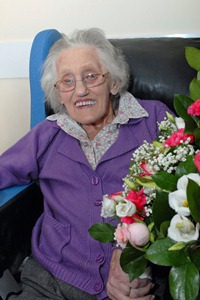 Kilroot parishioner Laura Clark celebrated her 100th birthday recently, and her rector the Rev Mike McCann and the choir of St Colman’s provided some musical entertainment to ensure Laura had a wonderful party.

Laura, who was born in Norfolk, now lives in Tamlaght Nursing Home and another visitor on her birthday was the Mayor of Carrickfergus, Alderman Billy Ashe, who presented her with some beautiful flowers. “It really is a milestone to be celebrated,” the Mayor commented.

The eldest of four children from a farming family, Laura was born on February 7 1914. She moved to Leicester in 1939 and after joining the Red Cross became involved in running drop–in centres for the poor and elderly.

She only retired from this work in the 1980s she and her husband moved to Bedford, later coming to Northern Ireland to be close to their eldest daughter in Carrickfergus.

Laura, who was a keen indoor bowler when she was younger, was born in the same year as actress Dorothy Lamour and actor Richard Widmark. February 7 1914 was the date on which movie legend Charlie Chaplin introduced his famous character The Tramp.

And it was in 1914 that HMHS Britannic, sister to the Titanic, was launched at Harland & Wolff in Belfast! 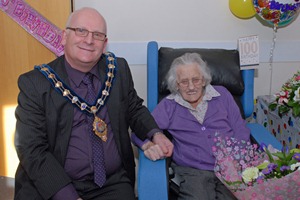