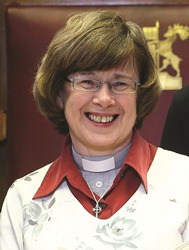 The Rev Mercia Malcolm, Vicar of Carnmoney, is one of 700 women priests taking part in a national celebration to mark the 20th anniversary of the ordination of women to the priesthood in the Church of England.

The Church of England first allowed women to become deacons in 1987, but it was seven years before they were permitted to be ordained as priests.

Mercia, who left Northern Ireland to study at university in Scotland, worked as a teacher and a civil servant before undertaking theology training in London. She was ordained a deacon in 1987, and served four years as a curate in Dartford, Kent, in the Diocese of Rochester. Her second post was in the team ministry of St. George’s, Stockport, in the Diocese of Chester.

In May 1994 Mercia, along with 31 other women in her diocese, was ordained a priest in Chester Cathedral. She believes that between March and July that year around 1,000 women were priested in various dioceses across the Church of England.

Mercia returned to Northern Ireland in 1995, and was a curate in Jordanstown and part time chaplain at the University of Ulster in Jordanstown. She later became full time university chaplain, and in 2003 was instituted as Vicar of Carnmoney.

Twenty years after those first ordinations, the Church of England has organised a national anniversary service to take place in St Paul’s Cathedral, London, on May 3.

This will be preceded by a picnic at Westminster Abbey and a Walk of Witness through London from the Abbey to St Paul’s Cathedral. Here, after a photocall with the Archbishop of Canterbury, the robed women priests will take part in a service of celebration.

Seven hundred of the original 1994 ordinands will be at the service. “A number of those who were ordained to the priesthood with me in 1994 would have been in their 50s or 60s, so some may no longer be alive and others might be quite frail,” Mercia said.

“I still hope I will recognise some faces, although I think I may be the only one travelling from Ireland.”

Looking back to 1994, Mercia said: “Each ordination was an amazing occasion. There were some anxieties around the services as there was considerable opposition at the time, so it felt like a big deal.”