5,000 lives touched – and Passion for Life is just the start 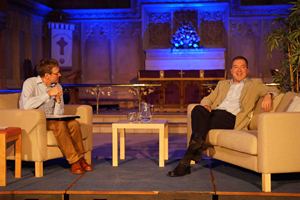 More than 1,000 people queued up to be part of an audience with PSNI Chief Matt Baggott when he joined the Passion for Life Mission in Coleraine.

Chief Constable, Matt Baggott, CBE, QPM, was the special guest at the opening night of the week of mission which got underway on Sunday April 6.

St Patrick’s Parish in the heart of Coleraine was the centre for this unprecedented mission initiative which involved 14 local churches.

Passion for Life brought the Christian message to thousands of people with celebrities and members of the local community stepping up to talk about what God has done in their lives. 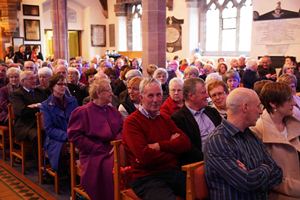 The Rev Roger Cooke, rector of St Patrick’s said: “The 14 churches came together for the week and during the Sunday evening we had to turn people away when Matt Baggott visited.

“People were queued right down the street to our Xtra–time Café. We had about 1,000 people and unfortunately we had to turn some away. It was packed and every last space in the church was taken – all three overflows were filled to capacity.

“Over the week I’m sure at least 5,000 people got involved with Passion for Life.”

Mr Baggott, who is President of the Christian Police Association, was interviewed by the Rev Robert McMullan, of New Row Presbyterian Church in Coleraine, and he spoke very openly about his faith and how much he has enjoyed working in Northern Ireland. 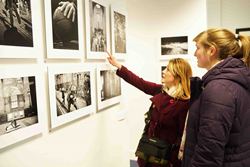 He said he was thrilled to see the churches working together to impact their community and paid tribute to the PSNI and those who had served before he took charge.

When he was asked if he had 30 seconds to tell someone what he thought was the most important thing in the world, he replied: “I’d tell them to ‘follow the evidence’ and figure out who Jesus Christ was and is.” For him, he said, He was ‘the saviour of the world.’

Roger said that following his interview, the Chief Constable had spoken to ‘umpteen’ people in the mission’s overflow facility – the Xtra–time café in the former Xtravision building. 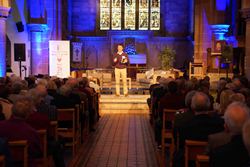 Since 1996 he has reported from 10 different countries worldwide, has been nominated for an RTS Award for his coverage of the Omagh bombing in 1998 and he has also gained a first class BA Hons in Applied Theology.

During an entertaining session Dave spoke to Shirley Alexander, wife of the Rev Greg Alexander of the Methodist Church, about his fascinating life.

Dave has interviewed two American presidents, three British Prime Ministers, two Irish Prime Ministers and two Presidents – but reckoned the most influential and exceptional people were the ordinary folk who were able to forgive those who had killed their loved ones during the Troubles. 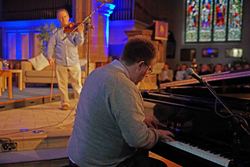 Also speaking during the week was Elaine Price, from Belfast, a former drug addict and alcoholic who had been caught up with the paramilitaries but whose life changed when she found Jesus.

On the Wednesday, local artist, Ross Wilson spoke about the people who had led him to faith, the international celebrities he had met in his creative life and the cross–community work he was doing, including some murals in Belfast.

The following evening Averil Neily, whose husband, a cancer surgeon, diagnosed himself with the cancer he’d treated in so many others, told a moving story of grief, grace and glory. 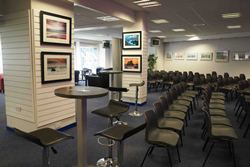 The Friday events included a family evening with St Patrick’s Family Worker Alice McAlary and Howard Beverland talking to young people about the difference God makes in his life.

The main speaker each evening was Pete Woodcock of Cornerstone Church, London, who spoke from John’s Gospel about Jesus’ claim that He came that we might have ‘life in all its fullness.’

During the week there was also a range of musical performances, food and an art exhibition in the café featuring work by Sarah Carrington (’Pilgrimage’), Ross Wilson, Mark Bell and Gilbert Lennox.

Reflecting a hugely successful week of mission, Roger said: “Passion for Life is just the start of an ongoing partnership with all the churches.” 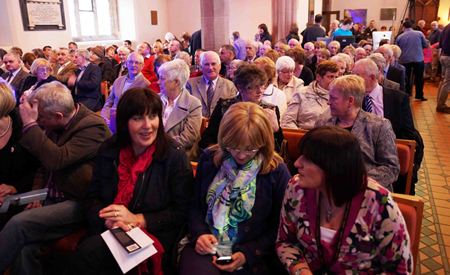