Irish classes a success in Monkstown 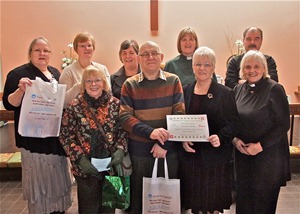 A sermon by the Rev Arlene Moore, Priest–in–Charge of the Church of the Good Shepherd, Monkstown, following the loyalist riots of summer 2013 led to the introduction of Irish classes in the parish.

Arlene said: “Some members came to me and said they too had decided they wanted to learn Irish in order to do something to project a more positive image of Protestant Christians and to develop a greater appreciation of the rich history and culture which is the common heritage of everyone who was born on these shores.”

For some this interest was sparked further through involvement in a new parish genealogy group, (iD), while others were keen to learn more about Irish history.

The West Belfast festival, Feile na Phobal gave the Church of the Good Shepherd the opportunity to make contact with representatives from Foras na Gaeilge, who put the parish in touch with local tutor Niall Maclochlainn and send members a starter pack of teaching materials including posters, CDs and dictionaries. 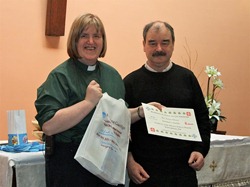 The venture has been funded and supported by the Ulltach Trust.

Linda Ervine, sister in law of the late David Ervine of the PUP, had spoken on ‘Irish for Protestants’ at Feile na Phobal and the Church of the Good Shepherd invited Linda to come and repeat her talk in the Jubilee Community Centre in Monkstown.

“Some members of a local flute band, Cloughfern Young Conquerors, also joined us on the opening night last October and helped set the scene by playing some tunes from their repertoire,” Arlene said. The following week, a 10 week taster course of Irish language classes got underway.

“Not only did the group’s proficiency in written and spoken Irish grow but the members also attended other events relating to Irish culture and Christian heritage, including St Brigid’s cross making workshops in An Culturlann; a guided tour of the Turas facilities in Skainos, EBM; and the Christmas Carol Service in St George’s where Bishop Alan Abernethy gave the Blessing in Irish and the recently published Holy Communion and other services prayer book was launched,” Arlene said. 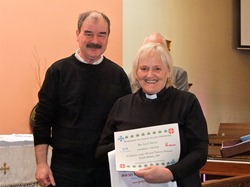 On the Sunday nearest St Patrick’s Day, when the Church of the Good Shepherd recommits afresh to the Covenant between the Methodists and Church of Ireland, presentations were made to the 10 people who had completed the course.

Some of the group wanted to continue to learn, and so at 8pm every Wednesday evening the class still meets in Church of the Good Shepherd, Monkstown.

“The craic is great as the sounds of what seemed initially unpronounceable and incomprehensible become slowly but surely increasingly familiar,” said Arlene.