Christian Aid’s work in Zimbabwe ‘an expression of love’ 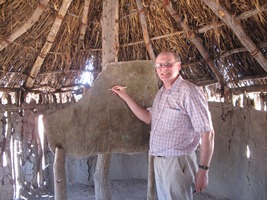 Canon George Irwin, rector of St Mark’s, Ballymacash, Diocese of Connor, and chairman of Lisburn Christian Aid Committee, travelled to Zimbabwe with the charity to see the work Christian Aid supporters are funding.

The trip was led by Helen Newell and Andrew Coleman from Christian Aid, and the team comprised people from north and south of Ireland.

During the 10 day visit, the group covered large distances overland and visited some 17 Christian Aid projects in the capital Harare, in Bulawayo and in Victoria Falls on the Zambian border.

The courageous and enterprising people George met who are endeavouring to overcome poverty and create a better future with the support of Christian Aid and its partners left George confident that any moned raised by Christian Aid in Ireland is doing great work.

The team travelled to Harare from Dublin on March 21, via Amsterdam and Nairobi, arriving late on the Saturday night. “The arrivals hall was an unkempt building and we were thoroughly checked and questioned about why we had come,” said George 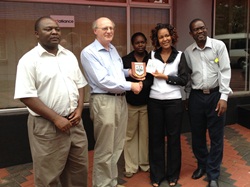 A letter from Christian Aid’s office in Harare ensured the group was permitted into the country. George described leaving the airport as an ‘eerie’ experience. “There was no one about because of a curfew and we never went out after 6pm or went anywhere on our own.

“There is still great tension. The formation of the government in 2008 was a terrible time and the economy is very poor, bringing an increase in crime. The police were visible on the streets.”

The morning after their arrival, the team worshipped at Marlborough Methodist Church along with staff from Christian Care, an aid agency for the Council of Churches in Zimbabwe.

“We were very warmly welcomed. The service was lively with a lot of dancing. The worship was very vibrant and the church was packed,” George said.

They visited their first project that evening. Salveira House runs an Artpeace Co–operative, and here the team met sculptors and artists. “These are very skilled people and before 2008 they would have sold most of their wares to tourists and would have made a good living but now there are no tourists and very few sales,” George said.

“There were about 15 of them and they had waited for us all day they were so keen to sell to us. We did try to buy something from each of them. One of the men had been caught up in the trouble in 2008 and had a terrible scar down one leg. He was also HIV+. It was quite a challenging experience. They were very frustrated because they had no home market for their produce and shipping costs are too expensive.”

The following day the team travelled in jeeps 250 miles to Zimbabwe’s second largest city, Bulawayo. “The roads were reasonably good, it was mostly savannah grasslands, some maize and there was evidence here and there of mining. People were selling things along the road but the population was quite sparse, with most people living in mud huts,” George said. 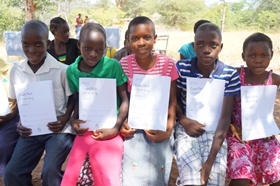 The streets in the city of Bulawayo were badly lit, a sign of the poor economy. The team had an early start the following day to visit Zimpro (the Zimbabwe Project Trust) in the very rural Susa province. Here they met government officials, agriculture workers and youth officers. They visited the Amazon Project, a simple shoe making operation where leather was cut with scissors and stitched together on a hand propelled Singer machine. At a carpentry project they saw basic furniture being made.

“It was very rudimentary indeed. There was a generator with a drill plugged into it, no electric lighting and most of the work was done in the open air,” said George. 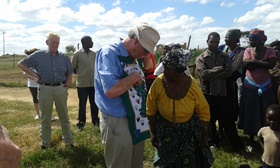 The group visited a garden project. “Most of the employees were women who had to carry water in buckets on their heads up a steep hill from a local spring. They were trying to grow tomatoes, mangoes and butternut squash which they sold locally,” George said. At another similar gardening project the group noticed basic toilets had been built, but these, like many buildings the group was to come across, were roofed with corrugated asbestos.

AN EXPRESSION OF LOVE 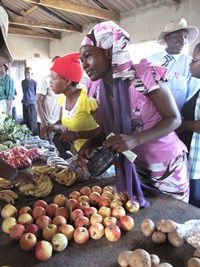 The group saw the produce of the garden projects on sale at a local market. “The market was planning for the future and was going to put in solar panels for electricity. It had a machine to dry certain leaves so they could be stored until they were sold, and they were also planning to buy a machine for making peanut butter,” George said.

“As we left the chair of Zimpro described the work of Christian Aid as an expression of love. It was a very emotional farewell.”

Before the end of a long day, the group visited the Busy Girls’ Dressmakers project (pictured below), set up three years ago by four young mothers to produce items like seat covers and school uniforms.

“They were very enterprising but the whole experience was quite daunting. There were a lot of tears because of the sheer poverty. Outside the little house the girls worked in their parents were looking after their children who were just sitting around with nothing, not even shoes on their feet. In the middle of this was an emaciated dog. It was very harrowing, yet there was a great sense of hope because they were doing such a good job and a feeling that the money Christian Aid supporters in Ireland are sending is doing good work.” 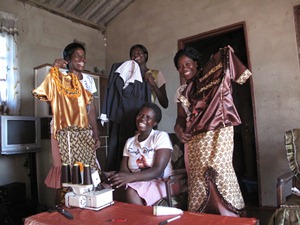 At the village of Binga, near the Kariba Dam, built to dam the Zambezi, displacing local people and forcing them into the bush, the group visited a project set up by Open Schools Worldwide.

Their first meeting was with Christian Care Officers and other local officials, as well as the International Director of the Open Schools Network who was visiting from Canada.

As classes are taught in the open air, the Open Schools Network has introduced special lapboards, with a blackboard on one side, important information about Zimbabwe, alphabet and times tables on the other. George described it as ‘school in a bag.’ 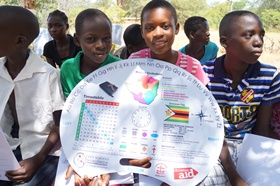 These had not arrived at Sichimiwali School, however. “The children were barefoot and sat on log benches under a tree. They had no desks and each was given a paper block to write on. The teacher used the trunk of a tree as a blackboard and to pin up information. Cowbells were ringing in the background and women passed by carrying loads on their heads,” George recalled. “Yet these children would never have received an education if it had not been for the opportunities offered by the Open School Network which targets children who have never been to school.

“They learn to read and write. They do two hours, three days a week and their target is to eventually go to state school.”

They also visited Mantunka School, where young people, described by the local chief as ‘drop–outs,’ strive to learn in a rough concrete building.

‘LOOK WHAT YOUR MONEY IS DOING’ 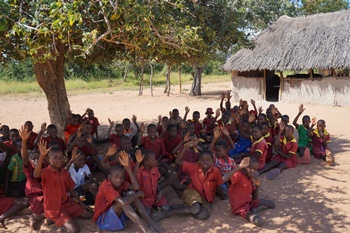 “There were 14 children and their teacher Robson was doing very well. They could all read and write. This was one of the things that gave us hope. The resources that were given to people like Robson were being used to the maximum. He was changing the lives of these children and I know I could stand up in front of any congregation and say ‘look at what your money is doing’.”

The group then saw the difference at Nzovunde state school where 289 children are learning in classrooms built of clay and wattle, with bamboo roofs. There are 40 children per class, and the blackboard was a stone slab resting on two forked sticks. There were only two toilets for all the pupils and staff.

“These are terrible conditions but Trevor the principal is a very resourceful man. He is full of hope and said that for the most part he and his staff are very happy,” said George.

At the ISAL group project, George met 10 women who had established a savings co–operative. After nine months of pooling their resources they were able to buy goats and are hoping to establish a fish market. “Their main aim is to raise funds to help orphans. HIV is very prevalent and myths about how it can be cured have contributed to high incidences of rape,” George said. 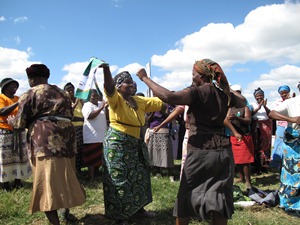 Christian Aid money had been used to help train the ladies running the project in book keeping.

In a village en route to their hotel, the group stopped to meet a child protection committee. George explained that every village has such a committee and one of the committee’s main aims is to obtain birth certificates for children and to offer support and protection to young people who have married before the age of consent, which is 16. The committee also challenges parents who make their children do too much physical labour or work which interferes with their education.

Each evening, the group gathered for a time of reflection. “This time would be quite emotional as people described their feelings during the day, they may have been angry or sad, but always there was a sense of hope that these people were doing things and that the money Christian Aid was putting in was a catalyst and it was being well rewarded,” George said.

A local bakery was on the itinerary next day, and here the local people, working in a mud hut, were doing a good job with very basic equipment.

The group had an opportunity to relax and take in the fantastic Victoria Falls and visit a safari park when they spent two days in Victoria Falls. Here they also visited a craft market where, once again, artists produced beautiful materials but there was hardly anyone to browse or buy them. Most of the visitors to Victoria Falls now come from Zambia and spend no time in Zimbabwe.

On their second Sunday in Africa the team worshipped at the Salvation Army Citadel in Victoria Falls before flying back to Harare on the Monday morning, where they visited the Zimbabwe Women’s Resource Centre and Network. Formed 23 years ago, the group supports services for women, provides a place for them to meet, talk and get information and provides an advocacy service.

“Christian Aid is about questioning the conditions that leave people in poverty. Advocacy is very important and that is why we support organisations like this,” said George.

The child mortality rate in Zimbabwe is 125 in every thousand, he added. Ninety two pence in every pound donated to Christian Aid goes to support vital projects on the ground.

The Environmental Law Association supports local communities, with a particular focus on mining and its environmental impact. In Zimbabwean law, the team learned, 55 per cent of the assets of a mining company should go to the local people, but this does not often happen in practice.

After a busy 10 days the team faced a lengthy delay when their flight home was cancelled.

Just home a few days in Ballymacash, George was still reflecting on his experiences as he prepared to draw up a report for Christian Aid. He hopes to share these experiences with church congregations. You can read his own thoughts on the trip here.