Church Lads’ and Church Girls’ Brigade given Freedom of the City 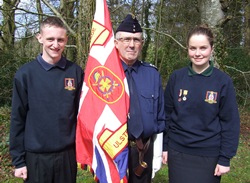 The Church Lads’ and Church Girls’ Brigade have been honoured by Lisburn City Council by being given the Freedom of the City.

The Brigade paraded with several other uniformed youth organisations, which were being similarly honoured, in recognition of the valuable work done in the community with young people.

Officers and members from companies in the parishes of Ballinderry, Broomhedge, Christ Church, Magheragall, St Paul’s and St Hilda’s, Dunmurry, took part in this memorable event.

Ten members represented the CL&CGB at a Civic Reception at which Mrs Margaret McCabe, Commanding Officer 1st/3rd Battalion, signed the scroll conferring the Freedom of the City. All those on the parade were awarded specially struck commemorative medals to mark the occasion.

That night there was a celebratory Open Air Concert in Wallace Park with performances from Luke Friend and Rough Copy from the X Factor.