Parishes pink up in preparation for Giro d’Italia! 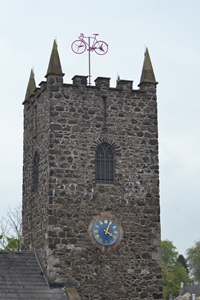 With the Giro d’Italia set to hit the streets of Belfast on Friday May 9, and to spin through the Diocese of Connor the following day, some Connor parishes have been getting into the Giro spirit.

Saturday’s run will have stops in Glengormley, Ballymena, Ballymoney, Bushmills (via Portrush) and Ballycastle before the cyclists tackle the spectacular Antrim coastline. They reach Larne for a stop between 1.45pm and 3.15pm and from here they continue via Whitehead to a stop in Carrickfergus and on through Whiteabbey to the finish in Donegal Square North in Belfast.

St Cedma’s in Larne are taking the Giro d’italia very seriously. Last Saturday a pink bike was hoisted above the tower of the church so it will be clearly visible in the build–up to the Giro, and as the competitors pass through the town next Saturday. 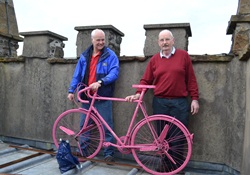 Thanks to St Cedma’s parishioners George Thompson and David Millar, the St Cedma’s bike is secured to withstand all weather conditions even in its lofty position! 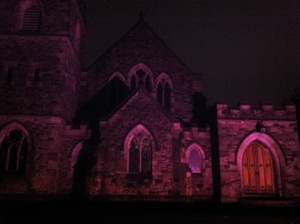 In Belfast, St Bartholomew’s Parish Church in Stranmillis has quite literally turned pink in anticipation of the Giro, as our picture shows.

The rector, the Rev Kevin Graham, said: “As we approach the Giro d’Italia this weekend Northern Ireland braces itself for one of the greatest spectacles in the cycling calendar. Many roads will be closed periodically to facilitate the race and one of these roads is the Stranmillis Road in South Belfast.

“As a homage to the Giro St Bartholomew’s is going pink for a week. On race day, Friday May 9, refreshments will be available from 4pm to 8.30pm at St Bartholomew’s as the team time trials pass the church. Here’s to a great Big Start for the Giro, Grande Partenza!!!” 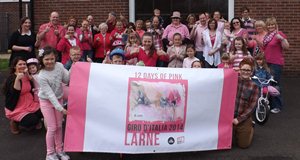 Last weekend’s Messy Church at All Saints’ Parish, Craigyhill, was even more exciting than usual as Messy Church went pink in honour of the Giro d’Italia.

Everyone was urged to dress in pink and people arrive at the Sunday morning event by bicycle!

As well as looking forward to the Giro’s visit to Larne, Messy Church in Craigyhill also highlighted the CMS Ireland ‘Wheels Appeal,’ which looks at how important bicycles are in other countries.