Celebration in St Paul’s was an ‘unforgettable experience’ 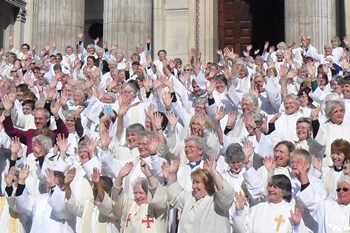 The Rev Mercia Malcolm Vicar of Carnmoney, was one of 700 women priests who took part in a national celebration to mark the 20th anniversary of the ordination of women to the priesthood in the Church of England.

The celebration took place in St Paul’s Cathedral, London, May 3, and the national anniversary service was preceded by a picnic at Westminster Abbey and a Walk of Witness through London from the Abbey to St Paul’s Cathedral where the ladies had a photocall with
the Archbishop of Canterbury. 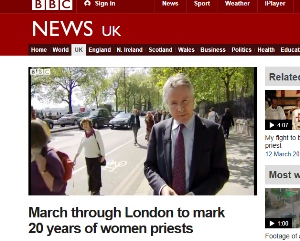 The Church of England first allowed women to become deacons in 1987, but it was seven years before they were permitted to be ordained as priests. Mercia was among some 1,200 women priested between March and July in 1994.

In May 1994 Mercia, along with 31 other women in her diocese, was ordained a priest in Chester Cathedral.

Mercia returned to Northern Ireland in 1995, and was a curate in Jordanstown and part time chaplain at the University of Ulster in Jordanstown. She later became full time university chaplain, and in 2003 was instituted as Vicar of Carnmoney.

Reflecting on the day’s events and the anniversary service, Mercia: “It was an amazing day and an unforgettable experience.” 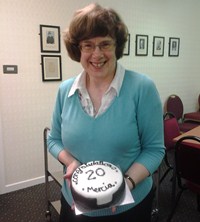 At a parish fellowship meeting in Carnmoney the night before Mercia left for the anniversary celebrations, she was presented with a surprise specially iced cake, made to look like a clerical shirt and collar.

And during the day of celebration Mercia met one other woman priest from Ireland, the Rev Ann Wooderson, who is retired but is currently helping out in Sligo. We understand another Irish representative was the Rev Eileen Cremin from Cork Diocese.