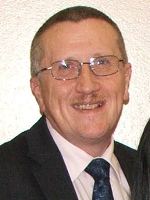 The synod is made up of the 12 bishops and archbishops, 216 clergy and 432 lay people. The Diocese of Connor holds 32 of those clergy places and 64 of the lay places. Members are elected for three year terms, 2014 being the final year of the current term. As such, it is the final meeting for a number of people – clergy cease to be members on their retirement and lay people must step down at the age of 75. Of course elections also bring winners and losers.

By tradition, the newest bishop leads the devotions each morning. History was therefore made this year when Bishop Pat Storey of the Diocese of Meath and Kildare, our first woman bishop, filled that role. Some may recall that she previously served in Connnor Diocese in both Ballymena and Glenavy.

Synod said farewell to the Bishop of Limerick who retires shortly. Before becoming a bishop, Trevor Williams served as a rector in north Belfast and as the leader of the Corrymeela Community in Ballycastle. 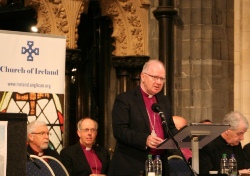 With a couple of exceptions, the General Synod of 2014 might best be described as a ‘tidying up’ Synod as much of the legal business was, for example, about sorting out the management of Cathedrals in the Diocese of Tuam and the Diocese of Down. A further example was giving approval to more time being taken by the Review of Episcopal Ministry and Structures (basically reviewing the role, work, deployment and appointment process of bishops).

Another change approved was the dropping of the restriction of the number (3) of under 21–year–olds permitted to serve on a select vestry. In addition, Dioceses were given more flexibility in the composition of a select vestry following the union of two or more parishes.

Fairly unusually one bill was not passed by the Synod. It sought to ensure that the parochial nominators for each parish should include at least one woman and at least one man. Synod rejected the bill, not because it was opposed to the principle but because it considered that in addressing one problem, it could create others. I have a feeling this issue will re–emerge with more flexible wording.

As normal, considerable time was spent considering reports of the work of various boards and committees and discussing topical issues – minimum pricing for alcohol, blood and organ donation, education and so on. Synod heard that the financial outlook for the churches investments was slowly improving.

Next year the Synod meets in Armagh.