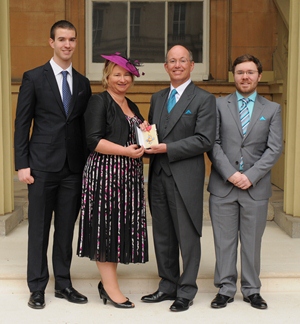 Professor Patrick Morrison, a parishioner of St John’s, Malone, was at Buckingham Palace with his family on May 1 to receive a CBE.

Professor Morrison was made a Commander of the Most Excellent Order of the British Empire for services to healthcare in the New Year’s honours list.

A consultant in genetic medicine at Belfast City Hospital, Professor Morrison pioneered DNA testing for hereditary thyroid cancer in the 1990s and was the first person to instigate preventative surgery for familial thyroid cancers based solely on DNA testing.

The honours ceremony was conducted by HRH The Princess Royal, who congratulated Patrick on his work and unstinting service to the NHS over the last 25 years.

Patrick is pictured with his wife Anne, a librarian, and sons Richard and Peter, who are both dental students.