‘You have walked with us’ Yei pastor tells partnership meeting 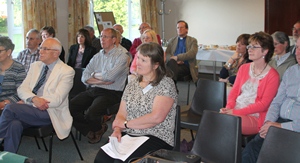 The partnership between the Diocese of Connor and the Diocese of Yei in South Sudan was the focus of an evening organised by CMS Ireland in Ballymoney on May 13.

Special guests were the Rev Basil Buga from Yei and Bishop Anthony Poggo from Kajo Keji Diocese, east of Yei. They are among a number of global partners in Ireland to help celebrate CMS Ireland’s 200th anniversary.

The evening was hosted by the Rev Andrew Sweeney, rector of Ballymoney, Finvoy and Rasharkin, and chair of Connor Council for Mission. Andrew was part of a team from Connor Diocese which visited Yei in January 2013. 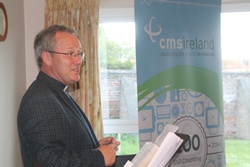 Another visit to South Sudan in January this year was postponed due to civil unrest which erupted in the capital Juba last December and quickly spread.

Andrew welcomed people from a number of Connor parishes and outlined the background to the Connor / Yei partnership, which formally began in 2007 but informally dates to 2003 when CMSI Mission Partners Billy and Jenny Smyth went to Yei to help establish the church–run Vocational Training College there.

That was before the Comprehensive Peace Agreement of 2005 ended decades of civil war in South Sudan. Billy and Jenny are now back in Northern Ireland but Jenny, in her new role as CMSI Partnership Co–ordinator, visited South Sudan in March and spoke about her trip at the meeting.

Bishop Anthony described the background to this latest conflict which he said he had displaced an estimated 1.3 million people and had cost the lives of at least 10,000. 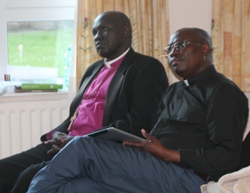 An agreement on a cessation of hostilities signed on January 23 had not been implemented, but he said the leaders of the two factions had reached agreement last week on implementing the January 23 terms.

A transitional government is to be formed. “This is very significant but there are a lot of issues to be hammered out about the transitional government,” Bishop Anthony said. “We request your prayers so that they will look at all these issues and agree expeditiously on the way forward, because that is the key for the future of this nation.”

The Bishop gave a brief biblical reflection on Nehemiah, drawing parallels to the situation in South Sudan. “What is going on in South Sudan should encourage us to pray even more, but not only to pray but to act, in some cases as advocates, to challenge our leaders to go the extra mile to secure peace,” the Bishop said. 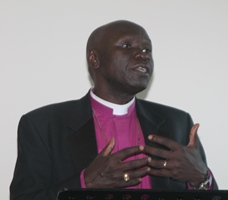 He told the meeting: “By helping build a school or a vocational training college you are helping in the fight against poverty and helping us prevent future war. You are giving us encouragement and a reason why we should remain in peace.”

Jenny Smyth showed images of devastation caused by the conflict in various parts of South Sudan, as well as pictures of the work the church is doing, providing food and shelter for the displaced people. Bethlehem Parish in Maridi Diocese has even set up a school for the children of families who have fled their homes.

“Yei town suffered violence and people were killed but things have stabilised and we pray that with the new peace agreement things will stabilise in other places, but it is really challenging,” said Jenny. 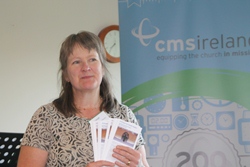 The church is taking a lead in reconciliation but Jenny added that there was a ‘desperate sense of loss of hope’ among the people of South Sudan.

An Emergency Appeal launched by CMSI has raised £42,000 which has been used to provide shelter, food and other essential items for displaced people who have sought refuge in church compounds.

“In Bethlehem parish in Maridi I found many women and children. They came in just the clothes they were standing in. They told me this is what they had been wearing when they ran away from their homes. There are tragic stories of loss,” Jenny said.

“Yet people have found safety and security in that parish church. It is an amazing witness.” 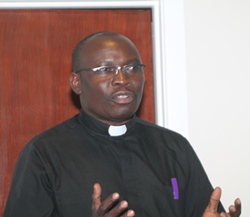 Rev Basil told the meeting that he grew up in a refugee camp in Uganda before his family fled the Idi Amin regime back to Yei. His studies in theology have taken him to a number of countries including Norway, Sweden and the UK, and he is hoping to do a PhD in Oxford next year.

“I just want to say thank you,” Basil told the meeting. “When you are a Christian and you are out walking you do not know what danger lurks near you until you have passed that section of road, but someone’s prayer has saved you. 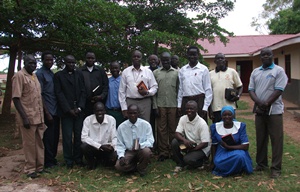 Basil spoke about Yei’s plans to relocate the theological training college from Arua in Northern Uganda to Yei town, about the work of the Martha Primary Care Centre and the success of Emmanuel Model Primary Schools and the hopes for similar success for the new secondary school.

“When you support the work of the church to help it to help itself, you build the capacity of the church. Bishop Hilary said to tell our brothers and sisters in Ireland that it is not about money, but it is about unity,” Basil said.

“When our hearts are united on a common journey of faith, together we will make it.” 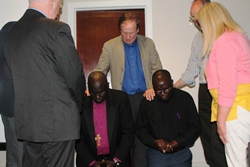 The support given by Connor Diocese to the various church projects in Yei was reiterated by Dr Frank Dobbs, a GP from Agherton Parish who was part of the last team to visit Yei. He said he had seen amazing things and amazing relationships grow between the two dioceses.

Before the meeting closed, prayers were said for South Sudan and for Bishop Anthony and Rev Basil.