Gail gets set for Coast to Coast fundraising walk 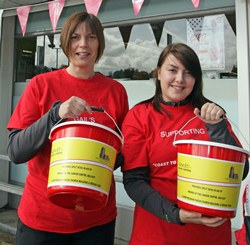 A Derrykeighan parishioner is in training for a Coast to Coast trek which will see her walk over 190 miles from one side of England to the other.

Gail Callan is undertaking the 192 Coast to Coast Walk in September, starting at St Bees in Cumbria and ending in Robin Hood’s Bay, near Whitby.

Devised by Alfred Wainwright, it passes through three contrasting national parks: The Lake District National Park, the Yorkshire Dales National Park, and the North York Moors National Park. Wainwright recommends that walkers dip their booted feet in the Irish Sea at St Bees and, at the end of the walk, in the North Sea at Robin Hood’s Bay.

Gail said she came up with the idea of going Coast to Coast after watching a television programme hosted by Julia Bradbury.

“I have always been a keen walker and would have done walks in the Lake District before. I had been watching the Julia Bradbury series and decided the Coast to Coast would be a good way of raising funds.

“My church in Derrykeighan needs a lot of work done to it and our family knows about the good work done by the Friends of the Cancer Centre at the City Hospital in Belfast so I decided to fundraise for them both.”