They had been invited by Prior Mark–Ephrem and the Benedictine community and despite it being exam time virtually all the girls were able to travel to this important centre of reconciliation, prayer and ecumenical endeavour. The girls, accompanied by Master of the Choristers David Stevens, Dean John Mann and Cathedral organist Ian Barber arrived in Rostrevor with just time to robe and find their seats. 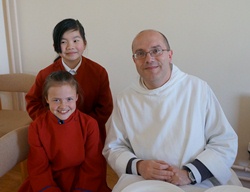 Dean Mann said: “As soon as the choir girls opened their mouths in the ‘Aston’ Preces we understood how they can now fill St Anne’s with sound, and we can be very proud of them, wherever they are called upon to go.

“Four psalms were appointed on Wednesday evening, and, with no chance of a rehearsal, there was some sight reading practice thrown in! No major problems were apparent!”

The girls quickly settled into the rhythm of the familiar prayers and responses. Howard Goodall’s The Lord is my Shepherd was beautifully sung, and attention in prayer then turned to the Ugandan Martyrs of the 19th Century, both Roman Catholic and Anglican, who were remembered in Ireland in the calendar that day.

“As we thought of and prayed for present day martyrs for their faith, the challenge to Christian commitment and discipleship was there for us all,” said the Dean. “The beauty of reading and singing daily offices is that several times a day, though some may think it just becomes routine, the act of raising the heart to God in familiar psalms and oft–repeated prayers is a constant anchoring of the soul.” 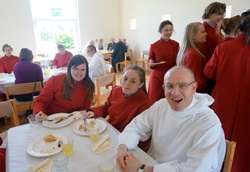 Following Evensong, the Cathedral group was fed on pizza, quiche and chocolate fudge cake. “The monks mingled with us all and visitors from Armagh and elsewhere,” said Dean Mann. “From memory, the plainsong setting of Before the ending of the day from Compline was chanted to end the meal.”