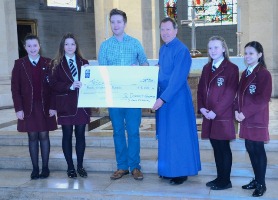 St Dominic’s Girls’ Grammar School presented a cheque for £4,000 to Trocaire from a collection taken at their annual Spring Concert, held this year in St Anne’s. The photograph includes the Dean of Belfast the Very Rev John Mann, Prof Denis Moloney and four pupils, including Rachel Brady, who is a member of the Cathedral Choir and who was a soloist at the concert in the Pie Jesu from Fauré’s Requiem. 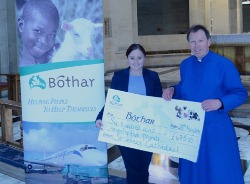 Aoibheann Fearon, NI representative of the charity Bóthar, of which the Dean of Belfast is a patron, received a cheque for £675 which was raised by Cathedral parishioners, largely at a Lent Lunch on April 6. The money will be enough to purchase three Irish goats which will be sent to Africa to help three families build a new future. “Such a relatively small input makes a very large difference in moving a family out of poverty to a position from where they can become self–sufficient,” said Dean Mann. 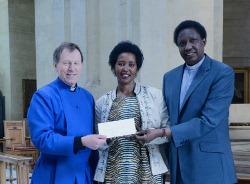 Jerome and Mary Munyangaju received a cheque for £375 for ‘Bird of Paradise Ministries,’ a charity working for the relief of those who continue to suffer as a result of the genocide in Rwanda 20 years ago. The funds were raised at a service to mark the 20th anniversary of this atrocity. 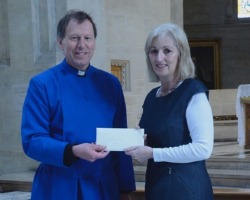 Deborah Doherty from Christian Aid received £540 raised by the Dean of Belfast and his wife Helen who walked part of the Belfast Marathon route on May 5. They expressed their thanks to all those in the Cathedral and from elsewhere who sponsored their endeavours.