Choristers meet across the generations

Time stood still for a short while in St Anne’s Cathedral on Tuesday June 10 when a visiting voice sang Lead me Lord along with some of the members of the fledgling Boys’ Choir.

Years fell away as Billy Noble, aged 105, closed his eyes and sang the well remembered words, the music taking him back to the day when he too was a boy chorister in the beautiful Cathedral. 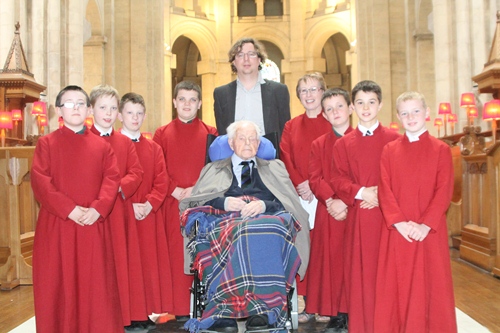 Jordanstown gent Billy accepted an invitation to come to the Cathedral to listen to today’s young choristers rehearse and his visit will create memories the boys and everyone else present will not forget.

Billy was born on January 5 1909. He was just three when the Titanic sank. He has lived through two World Wars and the internet revolution – and still fondly remembers the days when he too was a choirboy at St Anne’s Cathedral!

Billy was educated at Skegoneill School under the watchful eye of the strict headmaster Pa Magill and later studied at Inst. He admits joining the boys’ choir at St Anne’s not just to sing, but to play football as well! 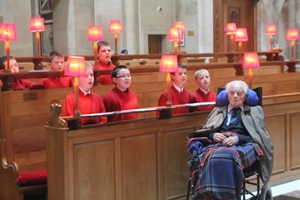 Billy was Comptroller of Estate Duty in Northern Ireland, and was a civil servant all his life. He was awarded the CBE in 1973, the year he retired.

He still lives in the home he set up with his late wife Henriette when they married in 1938 and is a parishioner of St Patrick’s Parish Church, Jordanstown.

Billy is underwhelmed by the many changes in life over the years. “Not a lot has changed,” he says. “A whole lot of wee bits maybe.”

During his visit Billy, who was accompanied by his son Denis and daughter–in–law Pamela, was interviewed by journalists from UTV, who feature his trip down memory lane in the news on June 11, and from the News Letter, who devoted almost a page to the story (Page 11 News Letter, June 11).

Billy very obligingly posed for photographs with the choristers and offered them a bit of advice, telling the boys to start young, to sing properly and to ‘keep going!’ He also admitted, however, that he would sometimes fall asleep during choir practice!

Billy agreed to join the boys singing Lead me Lord, his eyes closed as he perhaps remembered when he first sang this piece in the Cathedral, almost 100 years ago. 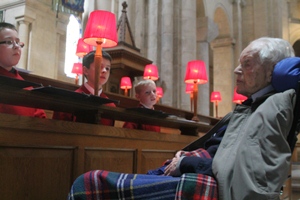 The boys were in St Anne’s for their regular Tuesday rehearsal in the Cathedral. They are all part of the Cathedral’s innovative Choir School Project which involves three schools in north Belfast – Edenbrooke Primary, Sacred Heart Primary and Cliftonville Integrated – with St Anne’s three singing tutors working in the schools every weekday.

This musical outreach is not only helping St Anne’s in its ambition to build a new cross community Boys’ Choir, but it is taking the Cathedral’s musical expertise into the community of which it is a part.

The Dean of Belfast, the Very Rev John Mann, welcomed Billy on his arrival to the Cathedral and chatted with this special guest throughout the visit. Dean Mann said afterwards that this had been ‘an unusual and very special meeting across the generations.”

Billy talks more about his life in the summer edition of the Diocese of Connor magazine, Connor Connections. This will be available in parishes from June 17.