Recital by Jonathan Clinch as part of Cathedral Music Festival 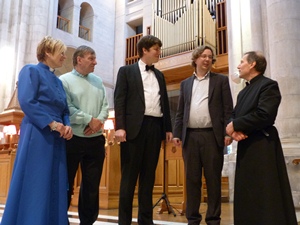 The week long Belfast Cathedral Music Festival opened on June 7
with a concert by the Edinburgh University Music Society, and continued on
Sunday with a superb performance of Jonah–Man Jazz featuring the pupils of the
Cathedral’s Choir School Project, the Girls’ Choir and the Cathedral Jazz Band.

On Monday evening, the Girls’ Choir were in the Cathedral again
for Sung Compline.

Jonathan Clinch is an organist and musicologist based at Durham
University. He received his early education at Bradford Grammar School, holding
the post of organ scholar at Blackburn Cathedral during his sixth–form years. 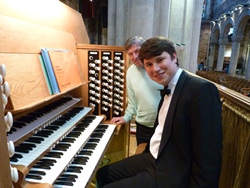 He read music at Oxford University, where he held the organ
scholarship at Keble College, studying with David Sanger, Nicolas Kynaston and
Colm Carey. Upon graduating he took up the post of Assistant Organist at St
George’s Cathedral, Perth, Western Australia and was subsequently College Organist
at Bradfield College in Berkshire.

In 2009 he completed an MA degree (with distinction) in organ
performance at Durham, studying with Dame Gillian Weir.  He followed this
with part–time PhD study on the music of Herbert Howells.

Since August 2013, Jonathan has worked for the university, where
he oversees extra–circular music and teaches in the music department. His
recent completion of Herbert Howells’s unfinished Cello Concerto has just been
published by Novello and recorded by the Royal Scottish National Orchestra.

Writing
his blog after Jonathan’s recital on Tuesday June 10, the Dean of Belfast, the
Very Rev John Mann, said: “Organ recitals are a unique musical experience in
that there is very little that is visual, but a huge and at times emotionally
draining contrast in sound to be heard.
What it must take out a performer is hard to imagine.” 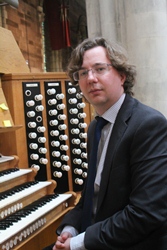 Dean
Mann writes: “The last, definitely not an after service voluntary, lasting
about 25 minutes, Julius Reubke’s Sonata
on the 94th Psalm, presented just the kind of contrasts that an
organ can produce – and played brilliantly.
Thank you!”

The
Cathedral Music Festival continues tonight (Wednesday) with an organ recital by
the Cathedral’s own Master of the Choristers David Stevens, with the St Anne’s
Girls’ Choir.

The
remainder of the festival programme is as follows:

To include Neun
deutsches Arien by G. F.
Händel

Purcell: Rejoice in the Lord always