MBE for the Rev Campbell Dixon 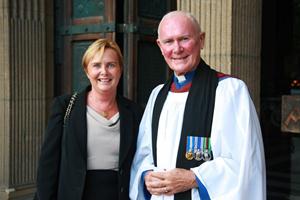 Congratulations to the Rev Campbell Dixon, part of Belfast Cathedral’s ministry team, who has been awarded an MBE in the Queen’s Birthday Honours.

Campbell, who was ordained in 2007 and has been working in the Cathedral since 2011, was previously District Policing Partnership (DPP) Manager for Newtownabbey Borough Council and receives the Honour for services to the community in Newtownabbey.

Campbell is married to Jacqui, Chief Executive of Newtownabbey Borough Council and the new Newtownabbey and Antrim cluster council. He said he felt very privileged to be awarded the Honour.

“The award is not just for my work with the DPP, but for other work I do in the community in Newtownabbey,” Campbell said. As a volunteer with the ‘Time to Read’ project, Campbell visits a local school one morning a week to give one to one reading tuition to children who are a little behind with their reading.

“I have also been involved in transformation work with Loyalist communities in Newtownabbey,” Campbell said. “This is challenging but we aim to help people in the community to look at things from a different perspective, to understand how society works and to look towards a different future.

“This is just a wonderful community and there are so many people doing voluntary work here. It is a real privilege to be given the Honour, but there are a lot of other people doing good work behind the scenes.”

Campbell grew up in the Ballymena area. He was with the RUC, later the PSNI, for 33 years, retiring in 2003 before he was appointed manager of the new District Policing Partnership by Newtownabbey Borough Council. “I was employed by the council but had a dual responsibility to the Northern Ireland Policing Board,” said Campbell.

“The DPP aimed to develop better working relationships between the police and the community. Newtownabbey had a fantastic partnership of community volunteers and councillors working together with the police and other agencies to resolve difficulties where the resolution did not rest with the police alone. Sorting out problems using a multi–agency approach was very rewarding.” Campbell retired as DPP Manager in 2011.

After being ordained in the Non Stipendiary Ministry, Campbell was curate in St Patrick’s Parish, Jordanstown, for more than four years before he was invited to move to St Anne’s Cathedral by the Bishop of Connor, the Rt Rev Alan Abernethy.

“It is quite different to parish ministry, but the pastoral ministry, which is very dear to my heart, is still the same,” Campbell said.