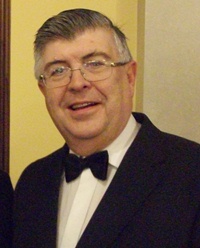 Professor Alan Hibbert, a member of Connor Diocesan Council, has been awarded an MBE in the Queen’s Birthday Honour’s List.

Professor Hibbert, a parishioner of the grouped parishes of Kilroot and Templecorran, is a retired Professor of Applied Mathematics at Queen’s University, Belfast, and is currently Deputy Chair of the Management Committee of Armagh Observatory and Planetarium.

He receives his MBE for services to astronomy.

Prof Hibbert represented Queen’s University on the Board of Governors of the Observatory and Planetarium from 2005 until he retired from Queen’s in 2009. The Observatory was established by Archbishop Robinson in the late 18th century, and the Board of Governors today is made up of the Archbishop of Armagh, the Dean and Chapter of Armagh Cathedral and a number of other people. The Management Committee was set up about 30 years ago and is representative of a wider range of interests and specialities and includes astronomers.

Prof Hibbert said he was surprised but delighted to be awarded the MBE. “It is not the sort of thing one ever expects,” he said. “My research links significantly with astronomy, but I would not call myself an astronomer.”

Born in Lancashire, Prof Hibbert obtained a degree in Mathematics from Oxford and a D.Phil in Theoretical Atomic Physics. “That’s the area of research I have stayed with,” he said.

He came to Queen’s in Belfast as a Post Doctoral Research Fellow and remained as a member of staff. He eventually became Head of the Department of Applied Mathematics and Theoretical Physics.

He was also Dean of Theology at Queen’s from 1997–2002 and is a Member of the Royal Irish Academy.

Prof Hibbert met his wife Gina at Oxford, and the couple have three children. When he first moved to Belfast, he worshipped at All Saints’ in University Street, before moving to the Church of Ireland Centre at Queen’s. In 1969 he was elected to the Management Committee of the centre and was successively treasurer and then chair of its Executive Committee for most of the intervening period.

“It has recently become a joint Centre with the Methodist Church and I am still on the Covenant Management Group and on the Church of Ireland’s Management Committee,” said Prof Hibbert.

The family moved to Dunmurry in 1977, and three years later Prof Hibbert became the parish organist, a role he occupied for 25 years.

When he came to live in Carrickfergus, he joined Kilroot parish and now plays the organ most Sundays in Templecorran Church in Ballycarry. He is a member of Ballyclare Male Choir.

Prof Hibbert has been a Synod Member for Connor Diocese for more than 40 years and is currently a member of Connor Diocesan Council.