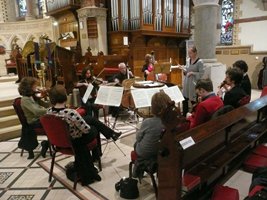 The Belfast Bach Consort uses the beautifully restored St Thomas’s Church in Lisburn Road as a backdrop to its monthly Cantatas by JS Bach.

When St Thomas’s re–opened after extensive restoration work, it took the decision to make itself available for musical events in addition to its regular parish activities. It is a beautiful church and has been carefully restored, without modern intrusions but with the flexibility that non–liturgical uses can demand.

The Belfast Bach Consort was one of the groups that took up that opportunity to perform in the church. The Consort had recently been formed to perform J S Bach’s extraordinary repertoire of some 200 church cantatas, and St Thomas’s has proved an ideal venue for them.

Bach wrote many of the cantatas to form part of the regular Lutheran services at St Thomas’s in Leipzig, and they are generally around 20 minutes long. They are usually performed today in concert form, often in a programme of three or four cantatas, but the Consort was keen to integrate them into church services to provide the context they were designed for. Bach wrote most of the cantatas for specific days of the Church year, and in effect they are mini–sermons. 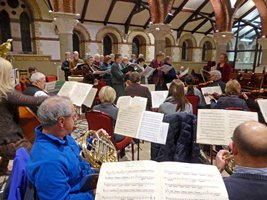 Realising that 20 minutes of music sung in German was going to be demanding of a Belfast congregation, the Consort initially alternated the movements of the cantatas with parts of the service, but soon realised that breaking the music up was unnecessary and the continuous music now forms the major part of the evening service at St Thomas on the third Sunday of each month. There has been no compromise on the German either – the cantatas are sung in German but translations are provided.

Marcus Patton, one of the organisers of the Belfast Bach Consort, said: “To most musicians JS Bach is possibly the greatest composer, for his sheer inventiveness and the range of his music from light dancing movements to utterly profound arias. Yet the cantatas are rarely performed, because they demand a wide range of instruments and are not a very satisfactory length for concert performance.

“The Consort is flexible in its membership, the core of around 10 string players and a four part chorus being boosted by additional soloists and frequently ‘obbligato’ instruments who will duet with the singers, ranging from one or more oboes to trumpets and on occasion trombones or recorders.”

The Consort was established when, nearly 10 years ago, a group of musicians came together in Belfast to perform one of Gilbert & Sullivan’s operettas for fun, in one evening. That was so successful that they performed their ninth annual G&S event this June, and this month the same group (at least many of the key members are the same, including organisers Andrea Rea and Marcus Patton) performs its 50th Bach cantata.

The Belfast Bach Consort is always open to new members and can be contacted through Marcus Patton at mp.hearth@virgin.net . It performs monthly throughout the year apart from breaks in July, August and December.