The Mothers’ Union held its General Meeting in Belfast this year from Friday June 20 to Saturday June 21.

The meeting was held at the Waterfront Hall on Saturday with guest speakers the Rev Chris Bennett, Chaplain of the Titanic Quarter, and Andy Kind, Comedian and Author on Saturday 21.

The weekend got underway underway on Friday with a reception at Belfast City Hall at 4.30pm when guests included local dignitaries, representatives from other women’s organisations and key Mothers’ Union figures. Among them were Reg Bailey, Chief Executive of Mothers’ Union, Lynne Tembey Worldwide President, Phyllis Grothier All–Ireland President, and members of the All–Ireland Trustee Board, Connor Trustee Board and Down & Dromore Trustee Board.

On Friday evening, more than 1,400 ladies and guests attended a special service of celebration in St Anne’s Cathedral. The choral evensong was led by the Dean of Belfast, the Very Rev John Mann, with the sermon from the Archbishop of Armagh and All Ireland Primate the Most Rev Richard Clarke.

Lessons were read by Lynne Tembey and Phyllis Grothier , and Intercessions will be led by the four All–Ireland Vice Presidents.

In his address, Archbishop Clarke said: “You have come to Belfast for this General Meeting and we are truly honoured and delighted to welcome you here. And, as you may already have discovered, Belfast is a very attractive city.

“We have still to find ways of working fully through a bitter legacy of past violence and the near disintegration of society. Part of that task will ultimately be to enable mercy and truth to meet together. The problem is that, as we survey the past, it is far too easy for us to want mercy to be manifest for ‘our side,’ but for truth to surface about ‘the others.’ And what is true for us in this Province is true in every place and every situation.”

The Archbishop continued. “The work that the Mothers’ Union does on these islands in prisons and with the families of those in prison, in giving hope where many have lost hope for themselves and for their families is emblematic of the task of going beyond a precise justice to a place beyond, where God’s mercy prevails.”

On Saturday the focus of the General Meeting moved to Belfast’s Waterfront Hall. The main purpose of the General Meeting – which is held in a different province each year – is to inform members of the work and activities undertaken in the previous year and to inspire them for the year to come, and it gives members the opportunity to meet
together and celebrate the work of the Mothers’ Union.

The General Meeting rotates around the five Provinces of Canterbury, Wales, Ireland, Scotland and York. It was held in Dublin in 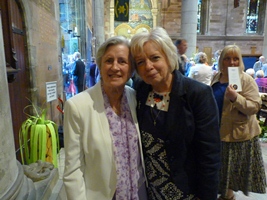 (Photos by the Rev Johnny McLoughlin) 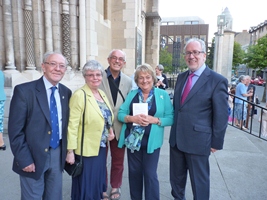