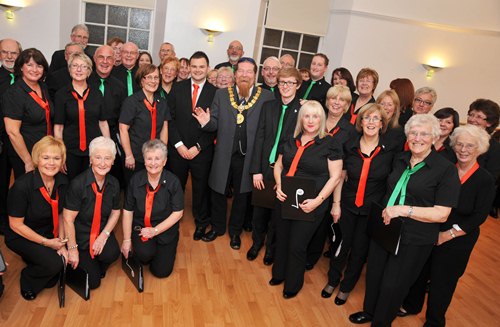 A concert by award winning Scottish choir A Choired Taste will take place in St Anne’s Cathedral, Belfast, at 1pm on August 10.

A Choired Taste is a mixed–voice community choir based in Kilmarnock, Ayrshire with almost 70 members from all walks of life.

They sing a wide variety of music including sacred, folk, musicals, pop, ballads, movie music, classical, opera, spirituals and light jazz. The choir also fundraises for national charities, and has donated more than £39,000 to charity since it was founded in 2009.

A Choired Taste has won Overall Best Adult Choir at the Ayrshire Music Festival for the past five years, and this year also won the award for Best Choral Performance of the entire festival.

At this year’s Glasgow Musical Festival, A Choired Taste won the class for Adult Mixed Voice Choirs, and was also awarded the Glasgow Orpheus Trophy for Best Overall Choir.

“We enjoyed our first tour so much that we decided to go on an international tour last year to Belgium, where we performed concerts in St Salvator’s Cathedral, Bruges, and St Michielskerk, Ghent, and well as having the wonderful opportunity to perform in the Last Post Ceremony at the Menin Gate, Ypres. We also had some very poignant moments, singing on various war cemeteries and war memorials.”

The concert begins at 1pm on Sunday August 10. All are welcome.