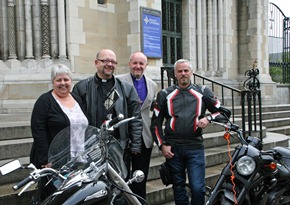 Move over the Hairy Bikers – meet the Holy Bikers! Two Church of Ireland clergymen have stepped out of their pulpits and with a rev of horsepower roared away from St Anne’s Cathedral, Belfast, on August 1 at the start of a 10–day charity bike run around Ireland.

The Rev Nigel Kirkpatrick and the Rev Andrew McCroskery have donned both helmets and dog collars for this epic ride to every cathedral in the Church of Ireland in aid of the work of the United Society (formerly USPG).

From August 1–10 Nigel, rector of Gilnahirk in Belfast, and Andrew, rector of St Bartholomew’s and Christ Church Leeson Park in Dublin, will bike it to all 30 Church of Ireland cathedrals, from Lisburn to Limerick and from Clogher to Cork! 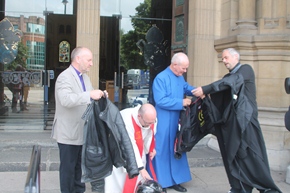 At each cathedral, Nigel and Andrew will join or lead a short service with prayers for the United Society and particularly their work in Swaziland.

Their 1500 mile ride zig–zags across the whole island and concludes back at St Anne’s Cathedral in Belfast at 3.30pm on Sunday August 10.

Nigel explained why the two rectors felt inspired to organise this innovative fundraising challenge for the United Society.

“We’re both passionate about motorcycling and also about the work of the United Society among the people of Swaziland, one of the poorest countries in the world with the highest rate of HIV infection per capita. 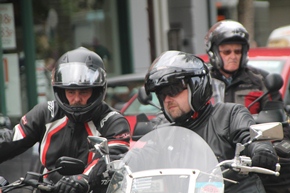 “In this 300th anniversary year of the United Society, we felt that riding motorbikes across the country, visiting every cathedral would be a novel way to honour their work, highlight the very crucial projects in Swaziland and raise some money.

“An added bonus is that we will be drawing attention to ancient ecclesiastical places in Ireland that many people will not have heard of. Plus we get to ride motorbikes for ten days!”

The ‘Holy Bikers’ as they have been dubbed, captured the imagination of the media in Belfast, appearing first on BBC Radio Ulster’s Good Morning Ulster programme before being filmed and interviewed for UTV Live with a short report at lunchtime on Friday. They were also scheduled to appear on the UTV evening news. 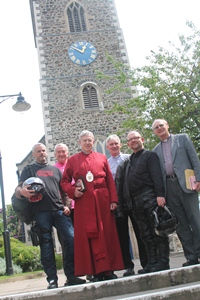 efore they set off, they took part in a Service of Holy Communion in St Anne’s, which was attended by the Bishops of Connor and Down and Dromore and the Dean of Belfast. When they finally finished their media work, they biked it down to Lisburn Cathedral where they were greeted by the Dean of Connor, the Very Rev John Bond, and local clergy, before a lunch which set them up for their onward journey to Dromore, Armagh and beyond…..

Andrew and Nigel are encouraging other motorcycling enthusiasts to join them, even for a short distance, along the route and make a donation to the United Society as they do so.