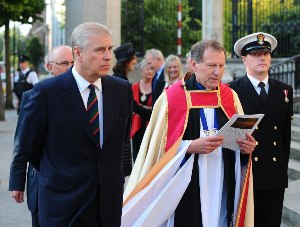 His Royal Highness The Duke of York KG was among a host of political and civic dignitaries at a service in St Anne’s Cathedral on Monday August 4.

The Service was a moving commemoration of the centenary of the outbreak of the First World War. (Visit our Photo Gallery)

It was one of a number marking the 100th anniversary of the start of the Great War. Among the guests were the Secretary of State for Northern Ireland, The Right Hon Theresa Villiers MP, deputy Lord Mayor of Belfast, Councillor Máire Hendron, First Minister Peter Robinson, Heather Humphreys TD, Minister for Arts, Heritage and the Gaeltacht of Dáil Éireann, and senior figures from the main churches in Northern Ireland and representatives of other faith communities. 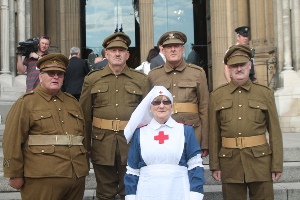 The service was led by the Dean of Belfast, the Very Rev John Mann, and the preacher was the Most Rev Dr Richard Clarke, Archbishop of Armagh.
His Royal Highness was greeted by the Dean and introduced to local church leaders: Cardinal Sean Brady and Bishop Anthony Farquhar from the Roman Catholic Church; The Rev Dr Michael Barry, Moderator of the Presbyterian Church in Ireland; The Rev Donald Ker, Secretary of the Methodist Conference in Ireland (representing the President of the Methodist Church) and Rt Rev Alan Abernethy, Bishop of Connor.

The service began with the hymn ‘O God, our help in ages past,’ and the Dean read a specially written bidding prayer which set the service in context.

The office of Evening Prayer followed with a psalm (psalm 139 verses 1–11), readings (Isaiah 2:2–5 read by Ms Humphreys and St Matthew 5: 1–12 read by the Duke of York) and the Magnificat and Nunc Dimittis. 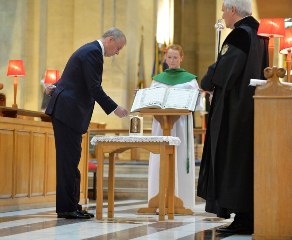 Candles were lit by five young people, three service cadets and two school children, to acknowledge each of the years of the First World War.

Following this the Duke of York lit a single candle in remembrance of the Irish who died in that War. A book containing the names of the fallen was taken from the altar and placed on a lectern beside the candle. During the lighting of the candles Cathedral musician Catherine Harper sang Dido’s Lament from Purcell’s Dido and Aenaes.

The Cathedral Choir sung the Anthem In Paradisum by Gabriel Fauré and hymns sung during the service were ‘Be thou my vision’ and ‘St Patrick’s Breastplate’ from ancient Irish sources. 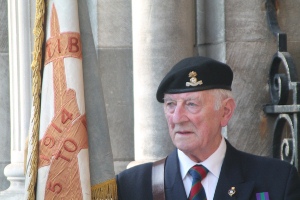 In his sermon, Archbishop Richard Clarke said: “We can create easily monuments of hatred (it takes no effort at all), or we can painstakingly and even painfully build monuments of beauty, even to a horrifying past. We can allow the ruins of what others have made of our hopes and longings to stand there, bare and broken, as a symbol of our hatred. We can build monuments to darkness, and it is only too easy to do.

“We can, and it is by far the more painful option, seek to restore beauty and even restore relationships, and allow light to shine in the darkness. It requires faith, courage and patience.”

The Archbishop continued: “And as we come into God’s presence here to recall and memorialise the beginnings of the Great War one hundred years later, it should be to lay before God’s feet all the fusion of emotions that there should be – sadness at the loss of so much life, young and old … pride in the unselfish actions of many people … horror at the inhumanity always accompanies war, and to this day … and determination that if this Great War was most certainly not a “war to end all wars”, nevertheless you and I will strive to bring God’s peace and light into God’s world.”

There was an Act of Remembrance introduced by the Dean, the Very Rev John Mann, and the President of the Royal British Legion in Northern Ireland, Mr Mervyn Elder MBE TD JP DL

Representatives of the Muslim, Buddhist, Jewish and Hindu communities in Belfast read reflections specially written for the occasion.

The service ended with the Blessing by the Bishop of Connor, the Rt Rev Alan Abernethy.

Dean Mann led prayers of welcome and also closed the vigil in prayer. He also repeated the words of his Bidding Prayer from the Service in St Anne’s as part of the vigil.

Copies of the full colour brochure containing the Order of Service for both St Anne’s and for the Candlelight Vigil at Belfast City Hall, as well as information on NI War Memorials and Museums are available from the Cathedral. Please visit Belfast Cathedral’s Welcome Desk or ring 028 9032 8332 to request a copy.