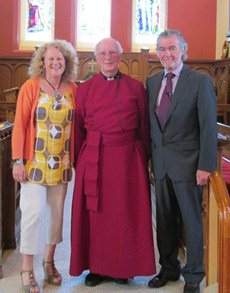 Canon Hubert Gough has completed 60 years in ordained ministry with the Church of Ireland, and this milestone was marked at a service in Agherton Parish on July 6.

Canon Gough entered the sacred ministry of the Church of Ireland on July 4 1954 when he was made Deacon by Bishop Charles King Irwin in St Anne’s Cathedral, Belfast. After serving curacies in Glenavy, and Christ Church, Lisburn, he was appointed Bishop’s Curate in St Ninian’s, Belfast, in 1961, becoming rector there from 1962 until 1971.

There followed 14 years as rector of St Bartholomew’s Belfast, and 11 years in the united parishes of Templepatrick and Donegore, before Canon Gough retired to Portstewart in 1997 where he and wife Joan became parishioners in St John the Baptist, Agherton.

Blessed with continuing good health and unfailing enthusiasm for the Sacred Ministry since retirement, Canon Gough has been very active in responding to requests for assistance from many parishes in the northern part of the Connor Diocese, and particularly in Agherton. 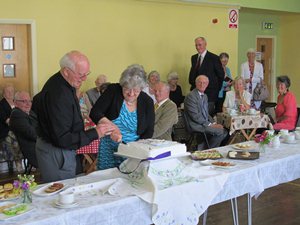 Just prior to 9.30am Holy Communion on Sunday July 6 in Agherton, where Canon Hubert was celebrant in the absence of the rector who was on holiday, the Rector’s Churchwarden Richard Sterling accompanied by People’s Churchwarden Mrs Judith Hough presented him with a small gift on behalf of the Parish to mark the occasion.

Richard congratulated the Canon on his achievement and conveyed to him the sincere thanks of the Parish for all his assistance to the Parish since retirement. After the service the congregation, which included a number of Canon Gough’s clergy friends, were invited to the Parish Centre to join him and his wife Joan for coffee and a piece of anniversary cake.

In his free time Canon Hubert frequently plays golf on the Dunluce links at Royal Portrush, and in winter evenings enjoys the odd game of bridge.