Congratulations to Mrs Mollie Holmes, OBE, who celebrated her 100th birthday in August.

Mollie, who still lives in her own home, received a birthday visit from the Bishop of Connor, the Rt Rev Alan Abernethy, and the Rev Brian Howe, curate at the parish of Ballymoney, Finvoy and Rasharkin. 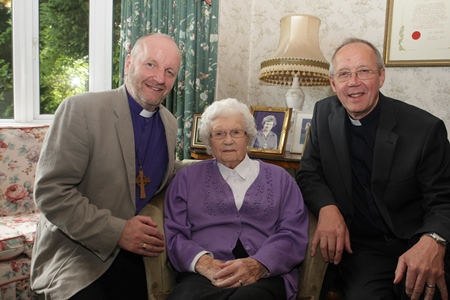 A former Mayor of Ballymoney, Mollie was awarded the Freedom of the Borough in April 1986, having been its chief citizen for eight successive years.

Mollie grew up at Colebrene farm and much of her adult life was spent within the town of Ballymoney.

She entered local government in May 1955 as the first female member of Ballymoney Urban District Council. She was elected and remained as an independent member until May 1985, when, after 30 years continuous service in local government, she stepped down from the office of Mayor.

She was also involved in the Robinson Hospital Committee, the Ballymoney Evergreen Club, the Road Safety Committee and the Royal British Legion.

She was for many years a Justice of the Peace for County Antrim.

The contribution made by Mollie to the public and private life of Northern Ireland in general, and Ballymoney Borough in particular, was recognised back in 1978, when she received the Order of the British Empire.

After his visit Bishop Alan said he had been delighted to help Mollie celebrate her 100th birthday.

“It was a joy to visit Mollie and her son in their home. Their hospitality was wonderful and we had the privilege of sharing Holy Communion together,” the Bishop said.