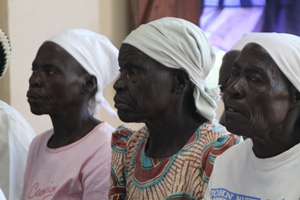 Parishes are to be asked to show their support for Connor’s partner diocese of Yei, South Sudan, by contributing to a number of initiatives identified as priorities by Bishop Hilary of Yei.

Ongoing unrest in South Sudan means that plans for a visit by a Connor team remain on hold, but the Bishop of Connor, the Rt Rev Alan Abernethy, and the Rev Andrew Sweeney, chair of Connor’s Mission Group, are keen to further the partnership in other ways.

Connor has been linked with Yei since 2007, and in January 2013 Bishop Alan paid his first visit to Yei and signed second five year agreement with Bishop Hilary.

Bishop Alan was due to return to Yei with a team including representatives of clergy, the youth relationship organisation Love for Live, MU and the medical profession in January 2014. That visit was postponed indefinitely after violence erupted in the capital Juba in December 2013 and quickly spread to other areas.

South Sudan, which gained independence in July 2011, is no stranger to civil unrest. Before the recent conflict, there were two civil wars in Sudan – the first raged for 17 years and ended in 1972, but the second broke out just 11 years later. In the subsequent 23 years, 1.9 million civilians lost their lives and four million were forced to flee their homes.

Today’s conflict has already cost 10,000 lives with 1.3 million people displaced either internally or as refugees in neighbouring countries.

Bishop Hilary has reported that Yei is not currently affected by this ongoing unrest, and the numbers of internally displaced people who initially arrived in southern areas like Yei and were cared for by the church have now moved on, either returning home or to live with family and friends.

The church has been taking a lead in reconciliation, and an Emergency Appeal launched by Church Mission Society Ireland (CMSI) early in 2014 raised £42,000 which was used to provide shelter, food and other essential items for displaced people who have sought refuge in church compounds. Parishes across the Diocese of Connor made a substantial contribution to this appeal in support of their friends in Yei.

Jenny Smyth, partnership coordination with CMSI, has revealed that £10,000 donated by Connor Diocese to the Emergency Appeal has not yet been spent and in consultation with Bishop Alan and Andrew, it has been agreed that this money should be invested in projects which will help stabilise the community in Yei.

Jenny said: “It is the churches role in stabilising the community that is its greatest strength against groups like ISIS.”

Education is one of the vital ways identified by Bishop Hilary of providing stability, and Connor Diocese has agreed that this outstanding money be invested in the building of the proposed new Imanuel Model Secondary School, improving the education prospects of the many young people when they finish at the diocese–run Imanuel Model Primary School.

Bishop Alan said: “This new school will be part of the ongoing process of healing in the community.”

Connor Diocese has also pledged to sponsor places for students at the Bishop Allison Theological College which is to reopen in Yei, having been moved to Uganda during the last civil war.

Any funds donated will be used to train clergy and invested into the college to help it become sustainable.

It will cost the equivalent of £1,500 a year to train a student, with most students following a three year course.

It was felt that sponsoring a student was something individual parishes in Connor Diocese could be asked to consider.

“Supporting students through theological college will help strengthen the core of the church,” Jenny said.

Parishes will also be able to maintain or establish a link with Yei through the introduction of Link Representatives. Working through CMSI, people in Connor’s parishes, identified by their rectors, will form a relationship with parishes in Yei.

The first meeting of the Link Representatives took place on Saturday September 20 and representatives of five Connor parishes were present. They were: Canon George Graham and Mo Creighton from Dunluce Parish: Myrtle McKay and Ian Foster rom St Matthews, Shankill; Dr Frank Dobbs, Agherton, Victoria Bell, Lisburn Cathedral and the Rev Andrew Sweeney, Ballymoney. It is hoped this number will continue to grow.

The diocese is also considering proposals that it supports the training of clergy to degree level, or contributes further to either the building of the new secondary school or to training teachers for the school. No decisions on these have yet been taken.