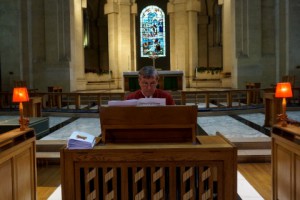 Ian Barber plays the new Barber Organ during the service of dedication in St Anne’s Cathedral on September 28.

Belfast Cathedral organist Ian Barber is to be made an Associate of the Royal School of Church Music in recognition of his 30+ years at the organ in St Anne’s.

Ian was further honoured on Sunday September 28 when the Cathedral’s new chamber organ was dedicated and named The Barber Organ.

Accompanied by his wife Jean and the Dean of Belfast the Very Rev John Mann, Ian will be presented with his honorary ARSCM at a service in Hereford Cathedral on Saturday October 4.

It is a fitting recognition for a quiet man who has devoted his adult life to church music.

Son of a Church of Ireland clergyman, Ian grew up in Holywood and attended Campbell College. He cut his teeth on the organ in the parish of St Philip and St James, and won a scholarship to the Royal School of Church Music.

Ian lived in the glorious old Addington Palace in Croydon, and progressed to the Royal College of Music in London.

“Living in Northern Ireland I had not come across much by way of church music so to move to England was amazing. We travelled to churches and cathedrals all over just listening to wonderful music,” Ian recalled.

His horizons’ broadened he moved to Canada to play the organ in St Mark’s Church in Ottowa. After two years he went to the Bishops’ University in Quebec to take a Degree in Theology and Clergy Training and when he qualified he moved to St Thomas’ Church in St Catharine’s, Ontario, as an organist.

Illness forced Ian to return to Holywood, and he was quickly snapped up by St Columb’s Cathedral in Londonderry as organist and choirmaster. The ‘Troubles’ were at their height and this was to prove a difficult time for Ian.  “I was able to keep a Boys’ Choir together but it was a struggle. They often couldn’t get to the Cathedral because of the fighting.” Ian left Londonderry after two years, moving to Ballywalter.

“Lord Dunleath was our patron. He was very enthusiastic about organ music and was a great support. It was a golden time and I had a very keen and loyal choir,” Ian reflected.

He was also teaching at Victoria College and later Strathearn School, where he was Head of Music for 21 years.

Jonathan Gregory, then Director of Music at St Anne’s Cathedral, asked him to help out, and in 1983, with the blessing of Dean Sammy Crooks, Ian was appointed assistant organist. This was a post he held until 2010 when he was recognised as organist and choirmaster. With the appointment of David Stevens as Master of the Choristers in April 2012 Ian resumed his role of organist.

Ian now plays the organ at evening services in St Anne’s on Wednesdays and Thursdays, at all Sunday services and on other special occasions.

He has seen many changes over the years. “There is a very different approach to music in the Cathedral. It is all very professional now, which is in keeping with other cathedrals. Before we had to rely on people’s goodwill,” he said.

“Now it is introducing established Cathedral music traditions. It is good for the City of Belfast, because if these steps are not taken that tradition will just disappear.

“Music has such an important role in any church service, but especially in a Cathedral.”

Ian has no intention of taking his foot off the (organ) pedals. “As long as I can do it properly I will continue to play the organ in St Anne’s,” he said.

“It is fabulous to play. It is large, very versatile and makes a lovely sound, which is helped by the great acoustics in the Cathedral.”

Ian paid tribute to his wife Jean.  “Jean has been a fantastic support. She has turned the pages for me all these years, and still comes to turn pages for me every Sunday,” Ian said.

He said he was very honoured to be made an Associate of the Royal School of Church Music.

And he added that the new chamber organ, which will be used for special pieces such as Elizabethan and Baroque music, will be a valuable asset to St Anne’s.

“I am very touched that it will be dedicated The Barber Organ,” Ian said. “That is a lovely gesture on the part of the Cathedral Board.”

The Dean of Belfast, the Very Rev John Mann, said Ian’s contribution to the musical life of St Anne’s had been considerable.

“He has a feel for the instrument he plays week by week and for how it sounds in the cathedral that, because it is so harmonious, is easy to take for granted.  Visiting organists, however technically good, frequently struggle with the acoustic.

“I am always confident that Ian will play to suit the occasion and the music the choir is singing.  In my three years as Dean, I cannot think of a single service that he has not achieved this essential balance.  Long may he continue to play the cathedral organ for us!”

At the special Evensong service when the organ was dedicated the Cathedral choirs including the girls, adult sopranos and all the lay clerks formed a formidable group of singers for some fine choral works including an Orlando Gibbons’ anthem, which was chosen especially to suit the new organ, whilst a Charles Wood Magnificat and Nunc Dimittis were brought to their magnificent Gloria before the well-known Parry ‘I was glad….’

Dean Mann, said: “Afterwards there was cake and tea, more chat and photos and the pleasant memory of what had been, including two pieces played by Ian himself.  The music is still living with me two days later and the atmosphere of celebration and offering it all to the glory of God was particularly important for us all”