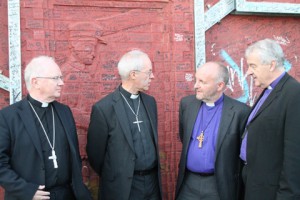 The Archbishop of Canterbury, the Most Rev and Rt Hon Justin Welby, and his wife Caroline toured north and west Belfast during their visit to the city on Thursday October 2.

They spent time in both Connor Diocese and in Down and Dromore on a sunshine soaked day that showed the city in its best light.

Staff from the local dioceses were also present. Following the food, and plenty of chat, Bishop Harold Miller (Down and Dromore) presented the Archbishop and his wife with gifts, before the group moved to the Chapel of Unity for the usual 8.30am Eucharist. Holy Communion was celebrated by the Dean, the Very Rev John Mann, assisted by Dean’s Vicar, the Rev Canon Denise Acheson.

Some of the members of the Cathedral Girls’ Choir had been persuaded to take a little time off school to sing the guests, and so the Archbishop walked from the Chapel of Unity to be greeted by the beautiful sound of the girls’ voices, accompanied by the Master of the Choristers David Stephens.

Clearly delighted, the Archbishop took time to shake hands with the girls and chat to them, though he did admit he was not terribly musical himself!

Archbishop and Mrs Welby then had something of a whirlwind tour of the Cathedral, conducted by the Dean, before moving outside for a photograph with staff from both the Cathedral and Church House, diocesan offices for Connor and Down and Dromore. 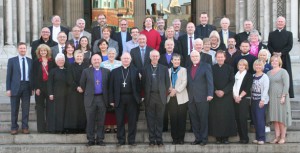 Staff from Church House and Belfast Cathedral with the Archbishop of Canterbury.

After farewells, Archbishop and Mrs Welby walked the short distance to Church House for a meeting with the Bishop of Connor, the Rt Rev Alan Abernethy, and diocesan staff including Diocesan Development Officer Trevor Douglas.

Bishop Alan outlined the geographic and political map of Belfast, before showing the Archbishop a video portraying the reality of life for many people in north and west Belfast through images and statistics.  The video also demonstrated the role the church has to play in some of the city’s most socially deprived area.

Archbishop Welby was visibly shocked by some of the statistics, particularly in relation to the percentage of children with special needs and the number of older people who have no formal education.

Bishop Alan spoke about the ‘peace walls’ – the Archbishop later visited one in Cupar Way – and told the Archbishop: “The peace walls segregate the community. They are so tall and they segregate people, yet the walls cannot come down until the walls in our hearts come down.”

Bishop Alan and Trevor outlined the diocese’s plans for the north and west Belfast area, including the building of a Centre for Mission in the area in partnership with the Church Army.

The plan would have mission at its heart, and would focus on reconciliation, outreach and community, they said. 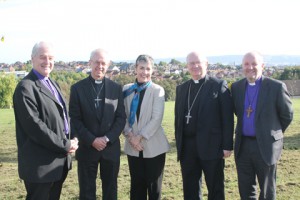 The Bishops and Archbishops with Mrs Welby at Glencairn, overlooking Belfast.

The plan would be replicated across the diocese, Bishop Alan said.

He said that the plans for north and west Belfast demonstrated the church’s commitment to these communities. “We have to show that it is more than just words. It is a commitment to stay with these people and to work with them. It is an incarnational gospel,” Bishop Alan told the Archbishop.

As they toured the streets of north and west Belfast by minibus, the Archbishop and Mrs Welby were shown parish churches and murals, and the bus stopped at the peace wall at Cupar Way, where the Archbishop was photographed and interviewed by the media and swamped by a large group of Chinese tourists who had arrived on a bus!

He good naturedly posed for photographs with the excited visitors, before the group moved up into the Belfast hills, stopping again at Glencairn where the Archbishop and Mrs Welby were able to take in the beautiful view of the city.

With a group led by the Bishop of Down and Dromore, the Archbishop and Mrs Welby later visited projects in east Belfast, including the Dock Café in Belfast’s Titanic Quarter.

That evening, the Archbishop preached at a service of Festal Evensong in St Patrick’s Church of Ireland Cathedral, Armagh. 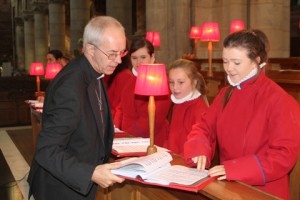 The Archbishop chats to choir girls in St Anne’s Cathedral.

Photo Gallery – Visit to Belfast by the Archbishop of Canterbury