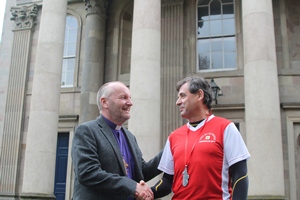 The Bishop of Connor, the Rt Rev Alan Abernethy, congratulates Ken Tate on his marathon run.

The race, run in six stages over seven days, was a familiar challenge for superfit Ken, who has already completed many ultra marathons and adventure races, including the Everest Marathon!

Ken was raising funds for an organisation close to his heart. The Joseph Project is a unique counselling service – an innovative development of pastoral care at St George’s. The parish draws on the insights of the very best of modern psychotherapy to reach out to those in difficulty.

The project takes referrals from courts, probation service, health service and social services agencies, as well as from individuals. One of its branches is Men to Men, founded as a small company, which gives the project charity and legal status. Ken was involved in running Men to Men for a number of years.

The Joseph Project has up to 50 clients each week, all taking weekly therapy which can last months or even years. The project offers ongoing training for students wishing to be counsellors, and all counsellors are members of the British Association of Psychotherapy and Counselling. 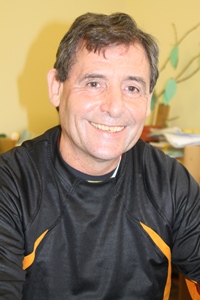 The Joseph Project was founded by the Rev Dr Hayden Foster, former Rector of St George’s, and the late Canon Dick McDonald, a renowned counsellor. The Joseph Room was consecrated by the Rt Rev Alan Harper, then Bishop of Connor, for counselling and for clergy to undertake pastoral care.

Ken said: “The Joseph Project raises the parish profile with clients and institutions that would otherwise be most unlikely to hear of our declared mission to be ‘an open door in the heart of the city.’”

Ken was in Madagascar from September 18-28. To train for the challenge, he was running six days a week, covering up to 75 miles a week as the race approached. He supplemented his training with cross training, cycling and weights.

Belfast born and bred, Ken has been Sexton in St George’s since 2000. “I worked with Men to Men for a number of years,” he said. “There are a lot of counselling services out there for women, but in the past there was not much for men who had emotional difficulties, such as divorce, mental health or addiction problems.

“When I was invited to take part in the Madagascar race I thought it would be a nice idea to raise a bit of funding for the Joseph Project through sponsorship.”

Ken took up running in his forties, and did his first marathon, in Belfast, on his 50th birthday. Since then, he has participated in a number of marathons in Belfast and other cities, and his adventure races and ultra marathons have taken him to many international locations including 100km races in Mongolia and Mali, a 140km run in the Sahara, the Everest Marathon, and most recently Madagascar.

“I don’t favour the city marathons so much as they take a greater toll on me than the mountains,” Ken said. “Running along a beautiful mountain trail is a lot easier on your hips and back than running on pavements and tarmac.”

He said his toughest challenge has been the Everest Marathon which he took part in in 2007. “We trekked to Everest Base Camp over the course of 20 days so we could acclimatize to the altitude, then we ran back down in eight hours.”

The total descent was a full marathon distance, 42.2km, and there had been a blizzard at base camp the night before the run back down began. “It is really very dangerous up there as recent events would show,” Ken said, referring to the recent tragedy in the Himalayas when more than 40 trekkers died in an avalanche.

“Conditions can be difficult, but we had our own medical team which was very important. During the day conditions could be quite pleasant but at night the temperature dropped. One night it was minus 18 and we were sleeping under canvas.”

He faced different conditions in Mongolia, where the Sunrise to Sunset ultra marathon took place during the country’s brief summer and covered 100km in one day. “It was a good one,” Ken commented!

The adventure race in Mali, west Africa, was run over six stages on varying terrain, while the Sahara run was another staged event. “We had to run in deep sand on a couple of stages, while other parts were quite mountainous,” Ken explained.

The Madagascar run was organised by a French athlete Ken first met during the Everest Marathon. It was won by Christophe Le Saux, who Ken describes as a world class athlete. “He would have taken the race very seriously, whereas most of the rest of us were the support act,” Ken said modestly.

The run took in the second highest peak in Madagascar and Ken was the only English speaking competitor, both of which presented him with a challenge!

Ken is still collecting sponsorship for completing the Madagascar adventure race. All funds will go towards the Joseph Project. Anyone who would like to make a donation is asked to contact Douglas McIldoon on 028 9023 1275 or the Rev Hayden Foster on 028 9024 7027.