‘The Boys from East Belfast’ to be screened in Belfast 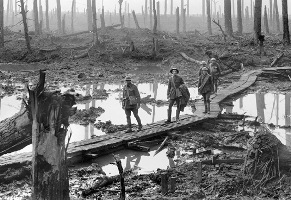 A specially commissioned short film documentary ‘The Boys from East Belfast’ is to be given its first screening at St Mark’s Church, Dundela on Monday November 10 at 6pm.

The film focuses on the discovery of letters written by 10 soldiers from East Belfast and serving at the Western Front.

The film is a collaboration between the RCB (Representative Church Body) Library in Dublin and the Church of Ireland Historical Centenaries Working Group who have produced it to coincide with Remembrance-tide in this the 100th anniversary year since the start of World War One.

Filmed and directed by Tim Hood, ‘The Boys from East Belfast’ re-enacts the full story of how a small collection of letters written by 10 soldiers serving at the Western Front who were also parishioners of the Church of Ireland parish of Dundela ended up in an old tea chest in Kilmore See House, and their subsequent transfer for permanent safekeeping in the RCB Library, Dublin.

There, in 2014, a group of local historians from East Belfast who have traced the lives of the letter writers viewed them for the first time, almost 100 years after they had been written.

The screening event on November 10 will also be an opportunity to hear from Dr Susan Hood of the RCB Library, who discovered the letters, and from the East Belfast historians.

The event will be part of a range of Remembrance-tide events taking place over several days at St Mark’s Dundela, Holywood Road, and the letters themselves will be on display there during that period. Following its public screening on November 10, the film will be available to view on the Church of Ireland website as the RCB Library’s November’s ‘Archive of the Month.’