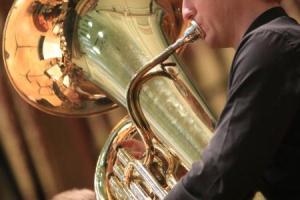 Ulster Orchestra will bring Britten’s War Requiem back to St Anne’s Cathedral for the first time in 49 years.

St Anne’s Cathedral will provide a fitting backdrop to Britten’s War Requiem, performed for the first time in Belfast in almost 30 years on November 14.

This unique cross-border collaboration between the Ulster Orchestra and the RTÉ Concert Orchestra marks the centenary of World War One.

The concert will also feature the Girls’ Choir of St Anne’s with Master of the Choristers David Stevens.

Britten’s War Requiem was last performed in Belfast Cathedral on November 13 1969, almost 49 years ago to the day. Parishioner Alan Boyd was in the Cathedral as part of the treble chorus line on that occasion, and you can read his reflections in the latest issue of the Cathedral Digest ( War Requiem spread ).

On the title page of the War Requiem score, Britten quoted Wilfred Owen: “My subject is War and the pity of War. The Poetry is in the pity… All a poet can do today is warn.”

Britten’s large-scale masterpiece intersperses his setting of the traditional Latin Mass for the Dead with poems by Owen, a First World War poet.War Requiem was commissioned to celebrate the opening (in 1962) of the new cathedral at Coventry, built to replace the one destroyed during the Second World War, and embodies Britten’s deeply held pacifist and humanitarian beliefs.

To book for this concert visit http://ulsterorchestra.com/events/brittens-war-requiem or phone the Ulster Orchestra on (028) 9023 9900