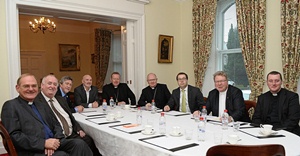 The Archbishop of Armagh, the Most Rev Richard Clarke, was among Church leaders who met this month with politicians to discuss on the impact of ongoing cuts in the welfare system.

During the meetings the church leaders emphasised that churches are acutely aware of the harsh realities faced by many dependent on welfare and how the current environment of uncertainty is generating high levels of fear and confusion among those who are already very vulnerable. They stressed that politicians need to act quickly to address that fear.

Pointing to increasing demands for support from church-based charities, and the uniquely high levels of child poverty, fuel poverty, working poor and disability welfare dependency in Northern Ireland, the church leaders appealed to all public representatives not to allow the urgent needs of the poorest to become a hostage to the wider political impasse.

They also highlighted the importance of helping the economy in Northern Ireland to become more sustainable, recognising that our particular history of conflict that has left us with some of the highest levels of social need on these islands.

The Church leaders appealed to all parties to keep the needs of the most vulnerable to the absolute forefront of their minds as they engage in the on-going talks to resolve the impasse over welfare reform.