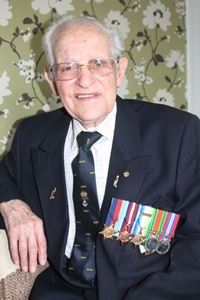 After 70 years of waiting, Lisburn war veteran Tommy Jess says he is ‘over the moon’ to finally be awarded the Russian Ushakov Medal for his role in the Arctic Convoys.

On Friday October 31, 91-year-old Tommy, a parishioner of Christ Church, Lisburn, finally received the medal recognising the pivotal role he played in World War Two when he attends a special ceremony in Belfast.

Tommy, whose moving wartime story featured in the June 2014 issue of Connor Connections, said that as the decades passed he had remained hopeful of receiving the medal. “I hope to get it before they have to pin it on my grave,” he said at the time.

Three years ago Tommy received a letter from the Russian Embassy to say they would like to confer the medal on him – but just months later he got another letter saying it was being withdrawn.

His granddaughter Laura Graham-Brown said: “It said ‘we are sorry but we have to withdraw this because the British Government won’t allow us’. It was overturned in the House of Commons and we are delighted that he’s finally going get it and accept it himself.”

Now Tommy will receive the Ushakov Medal at a ceremony in Belfast. “It all happened so suddenly, I just got word about it this week, and I have waited 70 years for it,” he said.

Tommy’s medals include the 1939-45 Star, the Atlantic Star, the Defence Medal, the War Medal and the Arctic Star which he only received in May 2013. It arrived in the post, although it was later formally presented to him by members of the Naval Association and local councillors in the Lisburn Mayor’s Parlour.

“This is a big of a change from getting the Arctic Star by recorded delivery,” Tommy said. “There was no ceremony when it arrived, but the Russians have done us proud.”

Tommy says he is still overwhelmed by emotion when he thinks back to the friends he lost in the war – more than 160 died on one day alone when his ship, the HMS Lapwing, was torpedoed in March 1945.

“A lot of years ago I could have talked more about it, now I get very emotional,” said Tommy. “But I am nearly 92-years-old and I am over the moon to finally be awarded this medal”

You can also listen to Tommy’s interview on Good Morning Ulster,

http://www.bbc.co.uk/programmes/b04lswqb  broadcast on October 31. Tommy’s interview is to be found 21 minutes 34 seconds into the programme

BBC Newsline was at the ceremony when Tommy was awarded the Ushakov Medal and he spoke to a reporter. You can watch the story online here.