Renowned trauma expert to give ‘unique’ talk in St Anne’s 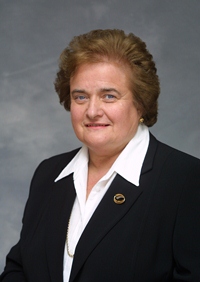 Talking about her profession is second nature to Dr Marion Gibson, who is renowned worldwide for her work in psychological trauma management.

But anyone who attends Dr Gibson’s Autumn Talk at St Anne’s at lunchtime on November 12 can look forward to something Dr Gibson admits will be quite unique.

Learning through experience has been the basis for Dr Gibson’s professional life, and since she became a parishioner of St Anne’s in 1975, the Cathedral has played a role in her life and work.

Over the years, Dr Gibson has converted learning into practice to provide psychosocial support to individuals and communities in the aftermath of traumatic incidents in their lives worldwide.

Dr Gibson was born in Larne and brought up in Belfast. Following a year as a student nurse at the Royal Victoria Hospital, she joined her late husband Tom in his parish in Liverpool Diocese. On returning to Down and Dromore Diocese in 1961 she worked in all aspects of parish life including community support in the front line of the ‘Troubles’ for 15 years, supporting those traumatised by terrorism in an interface area of Belfast. Tom was rector of St Clements, east Belfast, and a Canon of St Anne’s.

“I often feel that what I do is a positive legacy of this experience and my respect for the courage of those people throughout those dark years,” Dr Gibson said.

Following the death of her husband in 1975, Dr Gibson had to begin to rebuild a new life and she returned to the Royal Victoria Hospital to work as a Social Work Assistant in the Medical Social Work Department.

In 1977 she was seconded to train as a Social Worker at the University of Ulster, and as part of this training she worked as an Intern in a Psychiatric Hospital in Indianapolis where her work included direct support to those affected by the aftermath of military service in Vietnam. This enhanced her research into the impact of trauma on people and combined with her Belfast experiences led her to became acutely aware of the transferability of knowledge gained through experience in responding to incidents in different geographical and cultural settings.

Dr Gibson took her first Trauma Course with the International Critical Incident Stress Foundation (ICISF), based in Baltimore USA, in 1979 and has continued to be a practitioner and Approved Instructor for their models of Response.

Three editions of Dr Gibson’s book – ‘Order from Chaos – Responding to traumatic incidents’ have been published and she has been involved in many associated research projects and the presentation of conference papers worldwide.

Dr Gibson is currently a member and trainer within the British Red Cross Psychological Support Team which works in conjunction the British Foreign and Commonwealth Office Rapid Response team on a global basis.

Her contribution to an online training programme on responding to maritime disasters for the International Christian Maritime Association led to her appointment as an independent consultant to the international ‘Maritime Piracy – Humanitarian Response Programme.’

In 2000 Dr Gibson established an Employee Assistance Programme within Health and Social Services to support staff who have to deal with traumatic stress situations and since retirement manages the RESPOND Training team.

She was part of the Sir Kenneth Bloomfield team which reviewed and made recommendations to the Secretary of State for changes to the NI Criminal Injuries Compensation in 1999, and was appointed to Taoiseach Ahern’s Commission to research and establish the system for the payment of compensation to victims of institutional abuse.

As a result of Dr Gibson’s work in responding to the Asian Tsunami in 2004, Queen’s University of Belfast honoured her with the award of Graduate of the Year.

The ICISF (USA) awarded her the Founders Award for ‘Excellence and Innovation in the field of Trauma response’ in 2009.

Dr Gibson is currently Chair of Northern Ireland Music Therapy Trust and President of the Irish Federation of University Women.

She said: “There has always been a linkage between my professional life and the Cathedral, and this talk will be unique because it is taking place in the Cathedral and I plan to integrate a lot of what the Cathedral has meant to me how it has supported me in what I do.”

Dr Gibson will deliver the third in the Autumn Talks series at St Anne’s on Wednesday November 12. The talk gets underway at 12.45pm and will last approximately 45 minutes. Refreshments are served from 12.15pm. A suggested donation is £5.00.