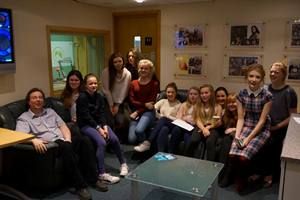 The St Anne’s Girls’ Choir and Master of the Choristers David Stevens at BBC Radio Ulster.

You can listen again to the interview which begins 55 minutes into the programme.

Presenter John Toal invited the girls, along with St Anne’s Master of the Choristers David Stevens and the Dean of Belfast, the Very Rev John Mann, into the studio to talk about Friday night’s performance of Britten’s War Requiem. 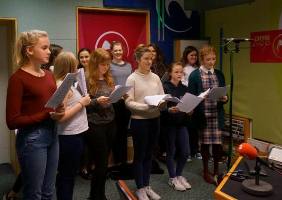 The girls sing in the BBC studio.

The Girls’ Choir will sing along with two other choirs, the Belfast Philharmonic and the Leeds Philharmonic, the Ulster Orchestra and the RTE Concert Orchestra, several soloists and a number of conductors.

In the broadcast, the girls looked ahead to Friday’s concert, and David and the Dean had the opportunity to talk about music in the Cathedral and St Anne’s Choir School project. The project takes cathedral music teachers into three schools in north Belfast to give children a chance to sing and helps the Cathedral train and recruit members for its choirs.

The girls sang two pieces, ‘Dulcis Christe’ by Grancini and’ Bist du bei mir’ by  Stölzel.  Presenter John Toal said they had sung so beautifully a spider crawling across his script had literally stopped to listen!

Master of the Choristers David Stevens at the piano during the Sounds Classic show.

He asked Dean Mann about the importance of a choir. “Having a good choir makes the whole vehicle of worship very special. You know every week that it is going to be special,” the Dean said.  “It is wonderful to have so many musicians and so many young people about. It adds to the whole atmosphere.”

Choir members Laura, Molly and Jenny spoke about services and rehearsals, and explained that a successful choir needs a successful conductor.

At the end of the interview, John Toal placed some music from Britten’s War Requiem. He said: “It is a piece you might only see once in your lifetime.”

War Requiem will be performed in St Anne’s Cathedral on Friday November 14. An open rehearsal will be held in the Cathedral the previous evening at 7pm.