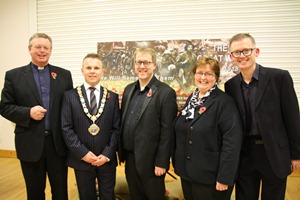 As part of the 100th anniversary commemorations of World War I, St Patrick’s, Jordanstown hosted a concert with the New Irish Choir and Orchestra called ‘Greater Love.’

The concert, on November 7, included music and true stories reflecting on the lives of Irish men and women who gave so much for others from 1914-1918.

A packed audience toe-tapped to well-known songs like It’s a long way to Tipperary, Colonel Bogey and Pack up your Troubles. The real stories of lives lost were gently weaved in and out of the music, climaxing with a reflection on Jesus Christ who paid the ultimate sacrifice. 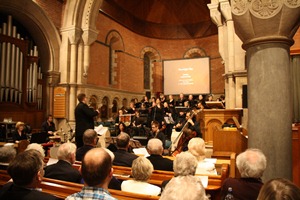 Also present were the Mayor of Newtownabbey and representatives from the Whiteabbey Branch of the Royal British Legion Poppy Appeal, which received the profits from the event.

Jordanstown curate and event organiser, the Rev Jonny Campbell-Smyth, said: “It was wonderful to see the church completely full, and to hear such positive feedback about the evening.

“The event has brought together people from across the community at this important time, helping us all appreciate the sacrifice made by those at war and those left at home. Due to the positive response we are delighted to be able to give over £800 towards the Poppy Appeal”

New Irish Arts’ (founded by the modern hymn writer Keith Getty) ‘Greater Love’ event is designed to appeal to a broader audience than one typically may get at church based concerts. The event features spoken word, music, multimedia and live visual art. New Irish produce large events in the major Irish concert halls each year, they regularly broadcast on BBC and RTE Radio and TV, and they also enjoy collaborating with other popular musicians.