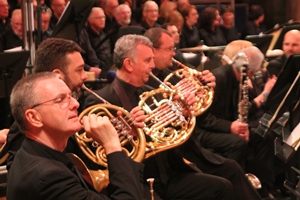 Some of the brass section warm up before the start of the War Requiem in St Anne’s.

There was a standing ovation at the end of Britten’s War Requiem at St Anne’s Cathedral, Belfast, on Friday November 14.

The stunning concert was a unique cross-border collaboration between the Ulster Orchestra and the RTÉ Concert Orchestra and marked the centenary of the outbreak of World War One. 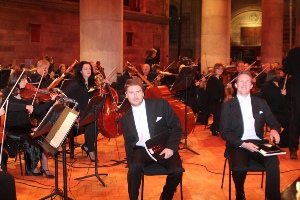 Male soloists Benjamin Hulett and Gavin Ring before the concert.

Britten’s War Requiem was last performed in Belfast Cathedral on November 13 1969, almost 49 years ago to the day.

Friday night’s concert was a sell-out, with the Cathedral packed with around 1,000 people including musicians and singers.