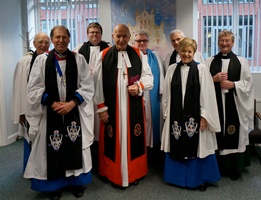 Dean of Belfast the Very Rev John Mann and Bishop Edward Darling with clergy who robed for the Harry Grindle Memorial Evensong on November 16.

The late Harry Grindle was honoured by the chamber choir he founded in a special Memorial Evensong in St Anne’s Cathedral on Sunday November 16.

More than 400 people attended the service and heard the preacher, Bishop Edward Darling, use the word ‘perfection’ to describe Harry, a man whose approach to music in Northern Ireland was ‘very inclusive.’

The service was sung by the Priory Singers, the group Harry founded in 1986. Director Robert Thompson said it was a fitting way to acknowledge his immense contribution to church music.

In his sermon, Bishop Darling said: “It is that word ‘perfection’ which today I would want to use to sum up the life of Harry Grindle.  As Lord Eames wrote of him in his Foreword to Harry’s own autobiography “REPRISE – An Irish Church Musician looks back”: ‘He has become a household name for perfection in preparation and production of choral work which has brought great beauty to congregations and audiences’. 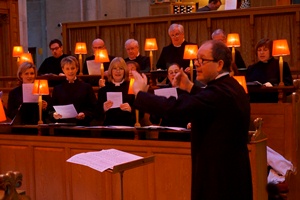 Bishop Darling recalled how he first met Harry in 1960 when Harry was organist of Willowfield Parish Church in Belfast, and he was serving his second curacy in the neighbouring parish of St. John’s, Orangefield. Harry moved to play the organ in St Comgall’s, Bangor, and in 1964 returned to Belfast to become Organist and Master of the Choristers in St Anne’s Cathedral.

“Here, in his own determined way, he gradually reshaped what, in effect, was virtually a choral society, under the directorship of CJ Brennan, into a cathedral choir of the very highest quality,” said Bishop Darling.

“Through the standard of its music, Belfast Cathedral began to make a marked impact on the wider community, and it wasn’t very long till its choir was being regularly heard singing in the mid-week afternoon Choral Evensong broadcast on BBC Radio 3.

“The Cathedral was one of the first churches in Ireland to adopt the Choristers Training Scheme which had been introduced by the Royal School of Church Music in 1965.” 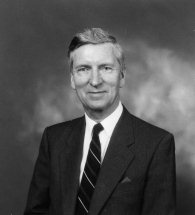 Bishop Darling said Harry had invited him to sing along with the Cathedral choir for special concerts and events, one of which was the first stereophonic recording of ‘Christmas Music from Belfast Cathedral.’

“It was on such occasions as these… that I saw for myself how Harry, through his detailed and thorough preparation with the choir, always strove to achieve perfection,” the Bishop said.

Speaking of The Priory Singers’ affection and respect for Harry, Bishop Darling said: “The Priory Singers greatly value what they learnt from Harry in the meticulous preparation and performance of chamber music of the very highest quality.  He has infected them with that detailed and disciplined striving for perfection.”

The Dean of Belfast the Very Rev John Mann said the large congregation at the Memorial Evensong had appreciated some fine music and an act of worship that was in keeping with many that Harry himself would have produced over the years.

“The musical legacy of Harry Grindle’s life and work, on the evidence of last Sunday afternoon, is secure, and for that we give thanks,” said Dean Mann.