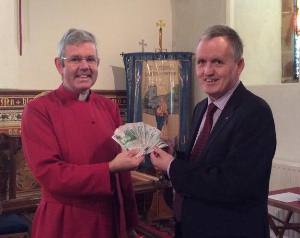 Parish Treasurer, Mr Tommy Lyttle, hands the rector of Larne, Archdeacon Stephen Forde, ₤1,000 in bank notes to give away as he wishes.

On Sunday November 23, the congregation of St Cedma’s, Larne, was treated to a ‘once in a lifetime experience!’ Instead of appealing to parishioners to give more money to the parish, the rector stood at the front of church and gave away more than ₤600 to anyone who would take the money from him!

The story behind this amazing cash giveaway by the Ven Stephen Forde, Archdeacon of Dalriada, was that Sunday 23rd had been designated ‘Talents Sunday’ at St Cedma’s.

Taking Jesus’ Parable of the Talents from Matthew chapter 25, Archdeacon Forde played the role of the master in the parable by handing out talents of money from a supply of ₤1,000 provided by Parish Treasurer, Mr Tommy Lyttle. 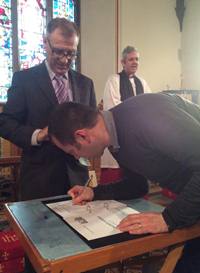 Expanding on Jesus’ parable, the rector explained that the servants had taken their talents and put them to work. The servant with five talents, made five more. The servant with two talents made two more. A 100 percent increase in both cases. Even the servant who was condemned in the parable did not lose the one talent given to him, but returned it, although if he had even put it in a bank, the talent would have earned the master the going rate of interest.

Not surprisingly, there was a long queue of parishioners willing to relieve the rector of his ₤10 notes. The plan is that each parishioner will take the money, and with their own personal talents, skills and enthusiasm will put it to work over the next five months, so that ₤10 will grow to ₤20, ₤50 or even ₤100. The rector set only one condition – that whatever means are used to make the talents of money grow, they must be legal! 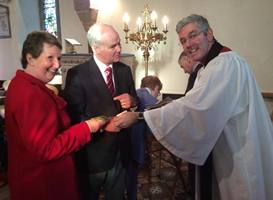 Judy and David Millar will enter into some family rivalry to see who can make the most money from their ₤10 note.

At the end of April 2015 there will be a further special service at St Cedma’s to receive the money back, multiplied.

The reason for all this creativity is that St Cedma’s Parish is in the midst of a major fund raising project to generate ₤300,000 to rebuild a new parish hall which will serve the community of Larne, fit for a new century.