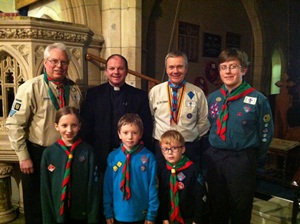 A night of celebration was held to mark the 60th anniversary of the foundation of the 81st Belfast Scout Troop at St Bartholomew’s, Stranmillis.

The evening began with a Service of Thanksgiving in the church which was filled with squirrels, beavers, cubs and scouts, who were joined by past members, family members and the District Commissioner Mr Ian Stewart.

The rector of St Bartholomew’s, the Rev Kevin Graham, spoke about reflecting God’s light through our lives and thanked the boys and girls for their generous contributions to the South Belfast Foodbank collection which had filled the church trolley to overflowing. He said this was a great example of reflecting God’s light in our lives.

Following the service a birthday party was held in the Parish Hall where photos from the past and a poster exhibition of the Scout movement since its foundation were on display.

Kevin said afterwards: “We are all looking forward to celebrating 65 years in 2019 which coincides with the 100th anniversary of the foundation of the Parish.”