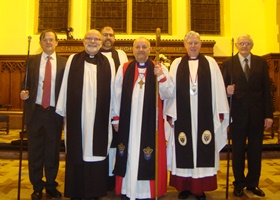 The Bishop of Connor was the preacher at a service on Monday December 1 to celebrate the 175th anniversary of the Parish of St Mary Magdalene, Donegall Pass, Belfast.

The service was the culmination of a series of events organised by the parish to mark this milestone. Activities during November included a Big Breakfast and a weekend of mission with Bishop Ken Clarke. This opened with a parish dinner on November 28 and highlights included a Youth Talent Show and a Family Service with Bishop Ken.

The Parish of St Mary Magdalene was initially established as the Ulster Magdalene Asylum and Episcopal Chapel and formally opened on Advent Sunday, December 1 1839. 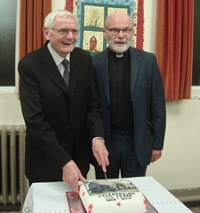 The Parish has contributed to this area of South Belfast in diverse ways since those early days. At a public meeting held in the Exchange Rooms, Belfast, on October 1 1833, chaired by the Rev John Kinahan, Rector of Knockbreda, a number of resolutions were passed, including the following: ‘That when we consider the circumstances of Belfast, which is daily rising in importance and increasing in population, we cannot but desire the establishment of an asylum for unfortunate females for the town of Belfast, and counties of Antrim, Down, Armagh and Tyrone, to be an object of great importance.”

In the spring of 1849 the asylum was opened for the reception of women, the premises containing dormitories capable of holding 50 beds. Accommodation was also provided for the employment of the women, and for the reception of linen to be laundered. The asylum was closed, due to financial pressures, in 1916. During the period of its existence it supplied shelter, maintenance, employment, instruction and encouragement to upwards of 3,000 women, to whom ‘its benefits were at all times afforded freely and irrespective of religious denomination.’ 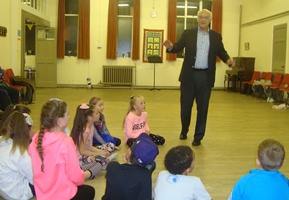 Bishop Ken talks to some of the children of Donegall Pass.

The parish also played a substantial role in educating the people of South Belfast. It operated its own School-House in Shaftesbury Square from 1853 to 1888. In addition, the Charlotte Street School-House was opened in 1870. In this building the 1st Irish BB Company was set up by William McVicker on December 31 1888. The church purchased another building in 1890, to use as a school, and this building in Hardcastle Street became known as the Magdalene National School. It was transferred to the Belfast Education authority in 1927 as a Public Elementary School, and closed in 1957.

The BB Company continues to this day and was central to the 125th Anniversary celebrations of the Boys’ Brigade. A live broadcast on Radio Ulster took place on Sunday September 8 2013 and the Belfast Battalion held its own service in the church on April 13 2014. Both occasions were very well supported. 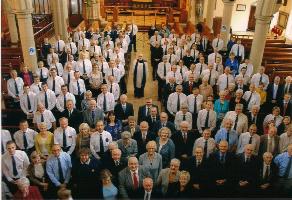 Picture taken at a live broadcast on Radio Ulster on Sunday September 8 2013.

Up until the 1980s St Mary Magdalene was filled to capacity and was the hub of the social life of the local community. In addition to the Boys’ Brigade, Girl Guides and Brownies, Youth and Badminton clubs thrived, as well as Men’s Clubs, Ladies’ Guild, Mothers’ Union and Bowling Clubs. Sadly, the ‘Troubles’ brought many of these to a close, but currently a Boys’ Brigade, Church Choir, Men’s Snooker Club, Ladies’ Guild and a Thursday Lunch Club meet regularly. The latter holds a service at 12.30 every Thursday, followed by lunch. Sunday worship is at 11am.

Apart from its own activities, the parish continues to perform key social functions. It contributes to the South Belfast Food Bank, under the auspices of the Trussell Trust, runs its famous Big Breakfasts on the second Saturdays in May and November, and hires out rehearsal space to many local groups. Ulster Operatic, NI Opera, Music Box and others who perform in the Waterfront Hall, Grand Opera House and other venues have rehearsed in the Magdalene. Countless local school pupils have taken their Associated Board exams in the Magdalene halls.  In addition, the 1st BB Old Boys’ Silver Band, which was set up in the parish, continues to perform and compete in musical competitions, as well as playing annually in the Church. 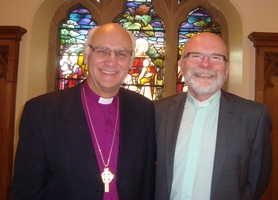 The Rev Bob Cotter with Bishop Ken after the anniversary service on December 1.

The parish is anxious to continue to play a prominent role in South Belfast for many years to come, spiritually and socially. At least one former parishioner – the late Dixie Gilmore – went on to become Lord Mayor of Belfast. A number of former parishioners have also gone on to ordained ministry in the Church of Ireland.

The latest multi-media equipment has been installed in the main church building and hall in recent months. Further updating of facilities will proceed apace, in order to more appropriately meet the needs of the modern age.

The Parish is keen to develop further the links it is re-establishing with the local community, not least through the efforts of the newly appointed Family Outreach Worker, Mrs Alison Shaw. A Parents and Toddlers Group now meets in the Hall every Thursday from 10am to 12pm and other courses of benefit to parents and carers are run.

The Parish is represented on the Board of Botanic Primary School and the Minister, the Rev Bob Cotter, takes assemblies there on a regular basis. He is also a member of the Donegall Pass Community Forum and has developed closer links with the Donegall Pass Youth Club and the Community Centre, as well as with his colleagues in the Apsley Hall, Elim Church and further afield.

There are decided opportunities for any young people who would like to be involved in the life of the parish, by contributing to worship, education and outreach in this inner-city area which boasts a proud past and hides a great potential. This is an exciting new phase in the illustrious history of St Mary Magdalene.