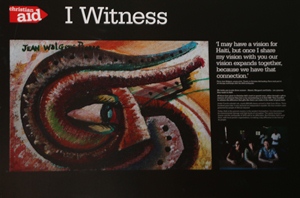 The I Witness exhbition by Christian Aid is on display in St Anne’s Cathedral, Belfast.

St Anne’s Cathedral, Belfast, is hosting an exhibition by Christian Aid showing the impact a legacy or memory gift can have on people across the world.

The ‘I Witness’ exhibition powerfully portrays how legacies, including one from a young girl who died of cancer, have helped rebuild lives in Haiti, a country which was devastated by an earthquake almost five years ago.

When Esther Childress dictated her Will, she thought not of herself, but of all the children in the world who did not have the support she did. Esther left to charities some of the money she had saved for the university she would never live to attend. 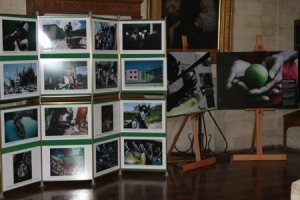 Christian Aid was one of the organisations to benefit from Esther’s selflessness and the charity honoured her wishes for a fairer world by using the money to transform lives in Haiti.

The impact of Esther’s legacy, and the legacy of other families, can be viewed in this moving and thought-provoking exhibition in the ambulatory at St Anne’s.

It is an appropriate setting for the exhibition. In the wake of the earthquake, the Cathedral community and the people of Belfast responded to the post-Christmas horror unfolding in Haiti by donating £150,000 to a special Black Santa Appeal. And Christian Aid receives funding at St Anne’s Good Samaritans Service each year for its work overseas. 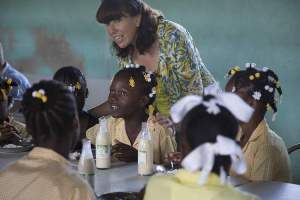 The facts and images portrayed in ‘I Witness’ were compiled during a visit to Haiti by three supporters of Christian Aid whose family members had left a legacy gift to the charity. Among them was Esther’s mum Kathy. The trip allowed the families to see how the legacy of their loved ones is transforming lives.

Deborah Doherty of Christian Aid said: “The purpose of this exhibition is to raise awareness of Christian Aid’s work in Haiti and show some of the positive developments which have taken place since the devastating earthquake of 2010.

“It tells the story of how legacy and in memory gifts represent so much more than financial contributions; they embody an individual’s passion, faith and commitment to bring about change in the lives of others.  We also know that individuals are inspired to remember Christian Aid in their Will by other people and their stories, or by shared personal experiences – not by statistics.” 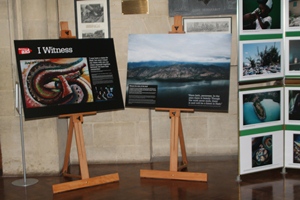 Christian Aid’s exhibiton is being hosted by St Anne’s Cathedral.

Esther was 12 when she was diagnosed with bone cancer. Instead of feeling sorry for herself she made it her mission to help others.  Sadly, Esther lost her battle with the disease in December 2012, just three weeks after her 14th birthday.

Her mum travelled to Haiti with Christian Aid to see how generous gifts, like Esther’s, help people around the world.

“When Esther became ill, she became a different person,” said Kathy.  “She met other children, like her, who were getting the support they needed and realised that there are children around the world who don’t receive such support.  She started thinking about the needs of others. Raising money for children who needed help became really important for her.”

Just 10 days before Esther died, Kathy heard her dictate her Will to her husband. “She’d received money from well-wishers before she died, and she’d saved it all. She decided to leave a third of her money to charities, including Christian Aid,” Kathy said.

“The best thing you can do is to leave a gift that does not have an end. Esther wanted to leave a legacy that would achieve something, and that’s exactly what she’s done.” 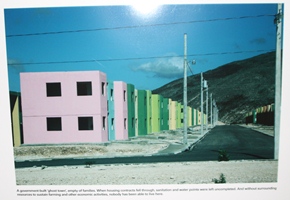 Housing built by the govenment in Haiti, but never occupied because building stopped before sanitation, water and other essential services were put in.

Deborah said: “Legacies are unique in that the people who give these gifts won’t be there to witness the transformation and change in the world that results from their decision.  But these gifts can represent new beginnings that nurture the potential of individuals and communities to help lift themselves out of poverty.”

She added that the exhibition aimed to capture the spirit of the people of Haiti, the rebuilding of lives and the importance of the land.

The exhibition, which has already visited St Patrick’s Cathedral, Dublin, can be viewed in the ambulatory of St Anne’s Cathedral and continues until February 9 when it moves to St Fin Barre’s Cathedral, Cork. Information about leaving a Legacy to Christian Aid is beside the exhibition.

“It helps, now and then, to step back and take the long view” – Oscar Romero