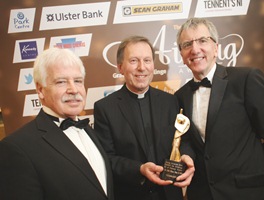 Belfast’s Black Santa, the Dean of Belfast, has received a prestigious award for ‘reflecting the true, unquenchable spirit of Christmas.’

The name of the Very Rev John Mann has been added to an impressive list of recipients of the Roll of Honour at the annual Aisling Awards. Previous winners include Linda Ervine, Baroness May Blood, the Macmillan Nurses and Alan McBride.

The Awards were presented at a glitzy ceremony, with the Roll of Honour winner unveiled at the end of the evening.

A citation in the Awards brochure reads: “The Black Santa is among Belfast’s proudest and most-loved institutions.” It describes the annual sit-out on the steps of St Anne’s as ‘a selfless and gruelling vigil.’

“Bus drivers taking impromptu collections on board have been known to stop on Donegall Street to boost the Dean’s coffers, taxi drivers visit frequently to hand over their day’s tips, while whip-arounds at office parties and donations from generous parents and children setting out on the Christmas shop all go into the kitty,” the brochure states.

The citation ends: “For reflecting the true, unquenchable spirit of Christmas – and of Belfast – and for making the largest single contribution to charity by any individual in the city, we are proud to add the Very Rev John Mann to our Aisling Roll of Honour.”

Dean Mann, who begins his fourth and Black Santa’s 38th Sit-out for charities on Friday December 12, said he was honoured to receive the award which recognised the dedication of all his Black Santa predecessors – Dean Sammy Crooks, Dean Jack Shearer and Dean Houston McKelvey – and the unfailing generosity of the people of Belfast.

The original Black Santa, Dean Crooks, will be honoured this Friday (12th @ 11.45am) when the Ulster History Circle unveils a Blue Plaque outside St Anne’s Cathedral  in his memory. Dean Mann will begin the 2014 Sit-out after the unveiling – extending the length of his Sit-out from one week to 10 days.

Guest speaker at the Aisling Awards was Thomas P DiNapoli, who, as New York State Comptroller, holds one of the highest political offices in the state of New York, overseeing the financial practices of a number of public bodies.