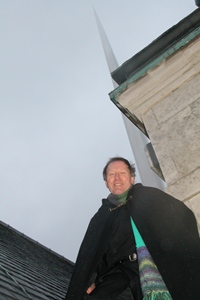 Black Santa, Dean John Mann, takes in the city of Belfast from the roof of St Anne’s Cathedral.

The Dean of Belfast, the Very Rev John Mann, will launch the 38th Belfast Cathedral Sit-out for charities on Friday December 12.

The launch has been brought forward  – it usually begins a week before Christmas Eve – to coincide with the unveiling of a Blue Plaque to Dean Sammy Crooks,  who started the Sit-out tradition in the lead up to Christmas 1976.

Dean Mann is hoping this year’s Sit-out tally will reach his target of £200,000 and, as our pictures show, has been scaling great heights – namely the inside balcony and even the roof of the lofty Cathedral –  to shout about it!

A short ceremony to unveil the Ulster History Circle’s Blue Plaque begins inside the Cathedral at 11.45am on Friday, and the Sit-out will get underway afterwards. 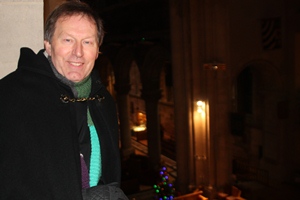 Black Santa looks down into the Cathedral as he contemplates the 2014 Sit-out.

As usual, Dean Mann will record his Sit-out experiences in the Black Santa Diary, to appear daily in the Belfast Telegraph from Monday December 15.