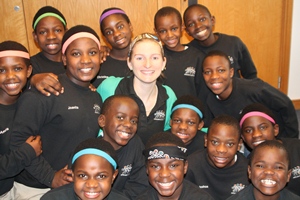 Lisa with some of her Choir before the concert at the Waterfront Hall on December 11.

Music graduate Lisa Carson will be bringing an all singing, all dancing group of friends with her when she visits her home parish of St Paul’s, Lisburn, on December 14.

For Lisa is a singing teacher with the African Children’s Choir, currently touring Northern Ireland, and St Paul’s is on the Choir’s busy Christmas Concert programme.

Lisa has been a volunteer with the Choir since September last year, and has been on the road with this, the 41st African Children’s Choir, since January.

She has toured in no less 10 American states, including Alaska, and four of Canada’s western provinces. The Choir’s UK tour will finish in mid-January, when Lisa, a former pupil of Hunter House College, plans to resume her studies, working towards a postgraduate degree in music therapy.

The 23-year-old is daughter of the rector of St Paul’s, the Rev Canon Jim Carson, and his wife Heather. 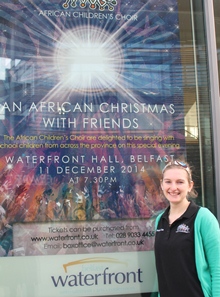 Lisa Carson outside the Waterfront Hall where the African Children’s Choir performs on December 11.

When she was studying at Edinburgh University, Lisa accepted an invite to watch the African Children’s Choir in concert, and was so captivated by the experience she wanted to be part of it.  “My degree was in music and I felt that God had given me the skills to become involved,” Lisa said.

She applied for a volunteer position and after several emails, telephone and Skype interviews she was offered a job. From September until December last year, she worked hard to fundraise  and in January flew to Seattle for a week’s training before joining the Choir in San Francisco for the start of the tour.

The Choir was founded 30 years ago by Ray Barnett, who lives in Canada but is originally from Coleraine. Its first tour raised enough money to fund a children’s home. A second choir was raised from the home, and every year one, sometimes two Choirs go on tour. The Choir’s parent body, Music for Life, works in seven African countries.

Proceeds of the tours and generosity of sponsors and donors ensure continuing care, education and development of returning Choir children. To date over a thousand vulnerable children have been through the Choir programme and the funds they have generated have provided the opportunity of education and hope for many thousands like them in some of the most desperate and needy areas of Africa. 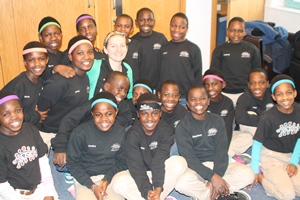 Lisa with all 18 members of African Children’s Choir 41.

Lisa described the children in her Choir as ‘amazing.’ “This project is all about unlocking the potential of children and taking them out of darkness, poverty and hardship and giving them hope and education,” she said.

“We are trying to share the hope of these children with audiences around the world.

“They are energetic, enthusiastic, joyful and thankful for everything they have. They have such loving hearts for God. I am supposed to be teaching them but I have learned so much from them, they are inspiring.”

Lisa said her year with the Choir had been an amazing experience, but admitted being on the road all the time isn’t as glamorous as some might think. “It can be quite tough. Because I live out of a suitcase I wear the same clothes nearly every day. We are constantly on the move and stay in four different places a week, but it’s fun and you adapt. God has blessed me in all sorts of different ways and I can see that in everything I do.”

The 18 children in Choir 41 are all from Uganda and their ages range from eight to 12. Africa is a continent close to Lisa’s heart as St Paul’s, Lisburn, has a partnership with the Diocese of Kajiado in Kenya and Lisa was part of a parish team which visited Kajiado in 2009. She hopes to visit Uganda sometime in the future, perhaps to visit some of the children to whom she has been an ‘Auntie’ for the past 12 months.

“Every adult is an Auntie or Uncle to the children,” Lisa explained. “We look after them and chaperone them like a parent would. They have 15 hours schooling a week, and we travel with a head teacher. Each day they also have rehearsals, playtime, reading time and family time, so we are pretty busy.”

Anyone who has seen a concert by the African Children’s Choir cannot be but amazed by the sheer joy in the children’s faces when they run out onto the stage, a joy that continues throughout each concert. 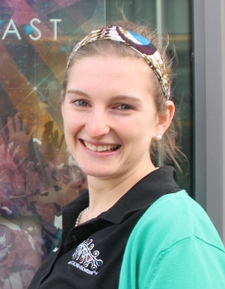 Lisa said such joy comes naturally to these children. “Some of them are from difficult family backgrounds,” she said. “But they are joyful children, they are loud and happy and like many Africans they are very dramatic! We try not to pump them up too much before a concert, but we teach them about glorifying God in everything they do. They love showing off and they feel so blessed. They know how much joy their music brings to people and always want to do their best.”

The adult volunteers are also responsible for the spiritual growth of the children during a tour. “We always try to make sure everything we do is God centred,” said Lisa. “That keeps us all humble and focused.”

Lisa is the only Choir team member from Northern Ireland. Her colleagues are from London, Uganda and America. During a tour, the children and their volunteer teachers are put up by families from the churches which are hosting their concerts.

Lisa is normally backstage during a concert, ensuring the children are ready in the correct costumes and carrying the right props. But she has been asked to speak to the audience at the Choir’s concert in the Waterfront Hall, Belfast, (December 11) and will be conducting the Choir when it sings in St Paul’s on December 14.

“Going to St Paul’s will be incredible. I am really grateful to all my supporters in the parish,” Lisa said.

Choir 41 will spend Christmas in Portstewart and will travel to Scotland and England in the New Year. Its tour finishes in the third week in January, and its members will return home. For Lisa that means saying goodbye to the children and colleagues who have been her ‘family’ for the past year. The children will continue their education at the African Children’s Choir Primary School.

“I am happy for the kids to go back. They are going to be looked after for the rest of their lives,” Lisa said. “Music for Life will support them and they will grow up to be brilliant and to be future world changers in Africa.

“Many past choir members have come back to help the choir once they have grown up. They are giving back in different ways. Some of our past choir leaders are now working in refugee camps in South Sudan.”

Music for Life has educted 52,000 children in its 30 years in existence.

Looking back on the past year, Lisa said there had been many high points. “We produced a CD called Immanuel God With Us and I taught the children the songs that are on it. When I heard it for the first time, it made me so proud of the kids,” she said.

“But every night when I see the kids run out onto the stage to the beat of the drums, their faces lit up with joy, it is an incredible feeling.”

Ticket details and further information are available on the African Children’s Choir website. Anyone wanting to see Lisa and the Choir in St Paul’s Lisburn should contact Heather on 07955 092892 for tickets.