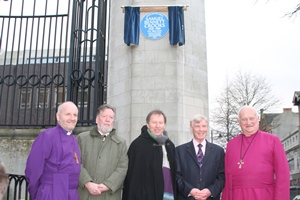 The Bishop of Connor, the Rt Rev Alan Abernethy; Chris Spurr, Chairman of the Ulster History Circle; Dean John Mann; Sam Crooks and Lord Eames after the unveiling of the Blue Plaque in memory of Dean Sammy Crooks.

A man who made ‘the vision of the living Christ a reality’ in the heart of Belfast was commemorated by the unveiling of a Blue Plaque at St Anne’s Cathedral.

The Plaque remembers Belfast’s first Black Santa, Dean Sammy Crooks, who began the Christmas Sit-out for charities in 1976, establishing a tradition which has continued for almost four decades.

The Blue Plaque was erected by the Ulster History Circle and was unveiled by Dean Crooks’ son Sam Crooks at the West front of the Cathedral in Donegall Street, Belfast, on Friday December 12. 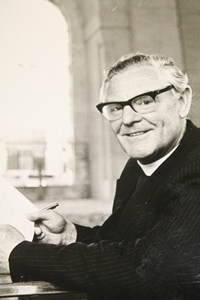 Dean Crooks died in a road accident in 1986, not long after retiring from the Cathedral where he had been Dean for 15 years. Former Archbishop of Armagh, Lord Robin Eames, who spoke at the unveiling, knew Dean Crooks well.

“Those of us who knew him and worked beside him… saw in Sammy Crooks a uniqueness,” Lord Eames said. “He took no prisoners, we are not remembering someone who was all joy, light and bland statements. He was determined and had a vision of what the Cathedral could stand for in the life of this city.”

Lord Eames continued: “His living memorial is not a plaque, his living memory is a man before his time who hit on the idea of giving this city, in times of tremendous suffering, a new light, a man who made the vision of the living Christ a reality in the heart of this city.”

Guests were welcomed to the unveiling by Chris Spurr, Chairman of the Ulster History Circle, who organised the Blue Plaque as a permanent memorial to the original Black Santa.

“The Ulster History Circle is delighted to honour Dean Crooks, the original ‘Black Santa’, with this Blue Plaque, placed near the Cathedral steps where his ‘Sit-out’ first began. The Circle would particularly like to thank Belfast City Council for their financial support towards the plaque,” Chris said. 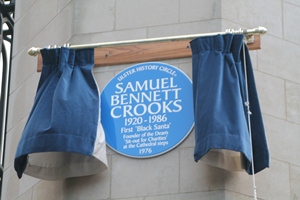 The Blue Plaque in memory of Dean Sammy Crooks.

Sam Crooks extended apologies on behalf of his mother, Isobel, who is 91 and not able to travel from her home in England. The Blue Plaque had given her ‘immense pride and pleasure,’ Sam said.

In extending thanks to the Ulster History Circle, the Cathedral Board and those who had made the commemoration possible, Sam also remembered some of those who had been involved in the first and early Sit-outs including Stanley McIlroy and Sir Donald Murray who were both present at the unveiling.

“If my father had been here he would have wanted to say three things. He would have welcomed the continuation of the convention of the Sit-out at the Cathedral,” said Sam.

“He loved this place. It was where he started his ministry and where he finished it. He was married here, my sister and I were both married here and I was baptised here. Our family has a huge emotional attachment to this building.”

The second thing that his father would have said was he believed the role of the church and clergy was to proclaim the Gospel, Sam added.

“He would quote the Epistle of James: ‘What does it profit a man though he says he has faith, but he has not works. Faith, if it has not works, is dead. I will show ye my faith, by my works.’

“To my father, the Sit-out was a proclamation of faith and of the Gospel.”

The third thing Dean Crooks would have said, Sam told the gathering, was that the success of the Sit-out was due to the astonishing generosity of the people of Northern Ireland, even in the middle of the Troubles.

“I see this Blue Plaque as not just commemorating my father, but also that generosity. I believe the Plaque will be a tribute to the continuing work of this great Cathedral and a tribute also to that great man who got it all started 39 years ago,” Sam concluded.

The group then moved outside for the unveiling of the Blue Plaque, and it was a poignant moment for some of those who were involved in that first Sit-out.

Sir Donald Murray remembers the day it all started. “Dean Crooks said to me, you know Don, the people of this province are fed up with us asking for money for the Cathedral. I think it’s time to reverse the operation. That was the first time the idea was ever mentioned, and I thought it was a great idea,” Sir Donald said. 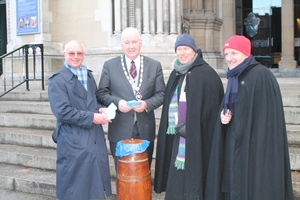 Representatives of the British Deer Society (NI branch) present Dean John Mann and Bishop Alan Abernthy with a cheque for £790 at the start of the 2014 Black Santa Sit-out.

As guests moved back inside to enjoy heat and refreshments, today’s Black Santa wheeled his barrel to the Cathedral steps.

Dean John Mann is hoping that the extra two days added to this year’s Sit-out to coincide with the launch of the Blue Plaque will help him reach his target of £200,000.

The Dean had no sooner pushed the barrel into place when a lady passing by dropped in some coins.

The British Deer Society’s NI Branch was next with a fantastic donation of £790 which was raised at a Gala Banquet organised in partnership with the Ulster Reform Club for its Members and their guests.

The spirit of Black Santa and of the generosity of the people of Belfast, brought to the fore that Christmas 38 years ago, is still alive and well in the heart of Belfast.

Samuel Bennett Crooks was born on January 20 1920 in Killough, Co Down, where his father was rector. He was educated at Down High School, followed by studies at Trinity College, Dublin, leading to his ordination as a priest in the Church of Ireland.

After a period serving as Dean’s Vicar and Vicar Choral at St Anne’s Cathedral, he was instituted as rector of St John’s Parish Church, Orangefield, where he raised funds and supervised the building programme. He was later rector of Shankill Parish, Lurgan, and was appointed Archdeacon of Dromore and Rural Dean of Hillsborough.

In 1970 at the age of 50, Archdeacon Crooks was installed as Dean and Vicar of Belfast in St Anne’s Cathedral. Never one to be daunted by difficult situations Dean Crooks set about raising major funding to complete the Cathedral, a project that had been on-going since 1899. He presided over the building of both transepts, housing a military chapel and the aptly named Chapel of Unity, which became a vibrant ecumenical centre, bringing together people from across the religious divide in the city and beyond.

Dean Sammy was a charismatic man. He could be straight talking and was intolerant of time wasting, but he was also warm, jovial, compassionate and welcoming.

In 1975, after severe flooding in Bangladesh resulted in many thousands of deaths, the Dean decided to stand on Donegall Street outside his Cathedral to collect money for the disaster appeal. This impromptu collection was so successful that he was persuaded to repeat it the following Christmas, using the slogan: ‘Give and let live. Save the children, feed the hungry, heal the sick. Please don’t pass them by.’

And so began the ‘Dean’s Sit-out’ which has become a major part of the Christmas tradition in Northern Ireland. Dean Sammy was dubbed Black Santa by the media and community.

The Dean was awarded the OBE in 1981, chiefly for his services to charity

Sadly, soon after his retirement, Dean Crooks died in a road accident on his way to a meeting at St Anne’s. He was 66. A headline in a local newspaper stated: ‘The Pilgrim passes on… Thousands mourn the man who touched the heart of Belfast.’